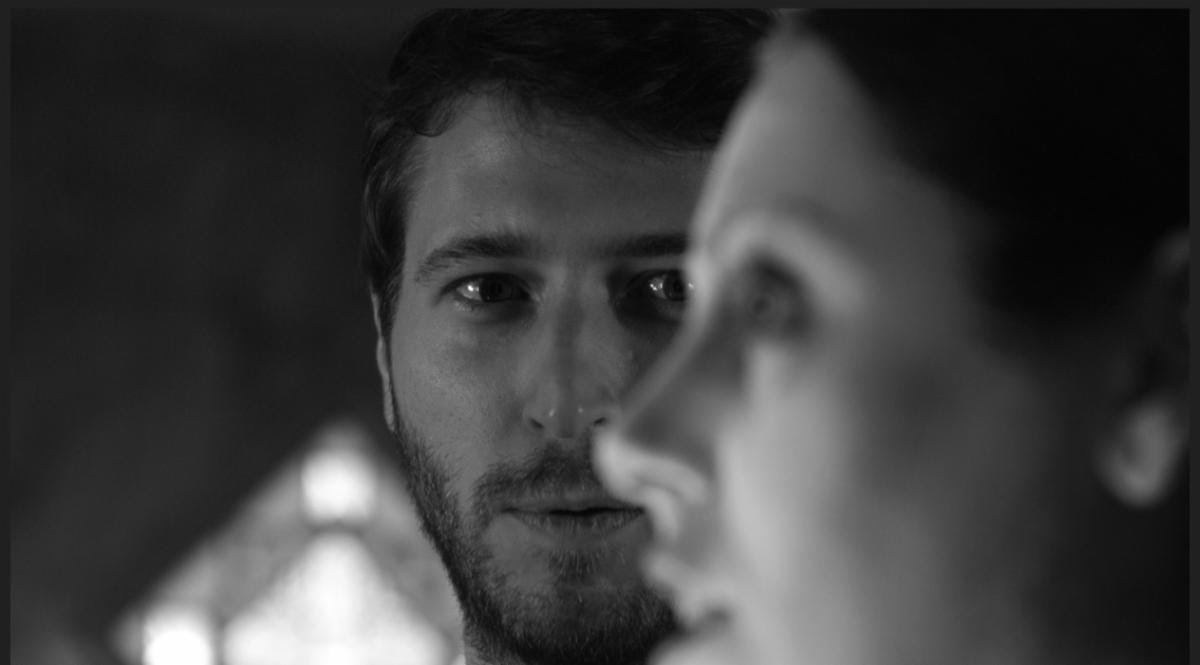 Written and directed by Adam Stovall, co-written by lead actor MacLeod Andrews, a man’s job requires him to clean a house, which turns out to be haunted, in the course of trying to exorcise the ghost, he falls in love with her. Also starring: Natalie Walker, Sydney Vollmer and Amanda Miller.

When you think of a film that centres around a haunted house, you’re probably not also immediately thinking comedy-romance but that may change after watching A Ghost Waits. Its opening may send a more traditional haunting vibe but that’s certainly not what it’s out to achieve. Jumping in knowing nothing, it may be a little bit confusing with the adjusting tone from straight out horror to romantic comedy but it does make its intentions completely clear as time goes on, creating an almost Beetlejuice, Warm Bodies hybrid.

The directorial style of the film is unreservedly indie American cinema, mixed with the choice to use black and white, it feels both indie itself and almost a nod to those that have come before it. Although, the choice to use black and white certainly makes more sense as time goes on, it provides an extra layer, taking away unnecessary distractions from its story but most importantly allows the make-up and lighting work to really enhance their spectral agents to differentiate them from the living without feeling cheap or needing unnecessary special effects. It’s those type of creative choices that keep things simpler but effective to keep the whole tone of the film feeling more self-aware and loose, instead of spiralling down a rabbit hole of self-congratulation. You can see the different genre influences at work, it takes primarily from horror but blends in the romance and comedy well to hit every note.

At first Jack (Andrews) seems purely like your average guy with the usual problems that come with everyday life but as his personality is revealed, he has a quirky streak to him, something a little bit different and gives the film a stronger anchor. The story moves at a good pace, it plays with typical haunting scenes but twists them to fit its own story and adds a parody element, the characters have a good back and forth and it’s continually adding something. However, once it does hit that cheesy, romantic, sentimental button, there’s no turning back and things take a dip, it goes from zero to sixty much too fast and the whole atmosphere changes to a much more predictable rom-com which is a shame to see.

The lead performances from Andrews and Walker work extremely well when they’re hitting those comedic notes, they have a solid chemistry and they’re fun to watch but the cracks start to show when they have to dive into some more sincere emotion. It would have been best to avoid it as with the very easy-going, silly style atmosphere that the film had built, it isn’t possible to pull off genuine emotion and hit those more authentic notes so it comes across awkwardly. Surprisingly however, Vollmer manages to hit a much more vulnerable note with Rosie, it balances out nicely with the flirty relationship between Jack and Muriel (Walker) and adds a bit of variety to the scenes.

A Ghost Waits adds an interesting twist to the classic haunted house story, bringing ghostly bureaucracy and supernatural romance. It goes a little too hard on the cheesy tone and does become somewhat predictable, it could have played into the darkness more with its comedy for the humour to feel more fresh. Overall, it’s a creative story with a lot of strange but sweet chemistry, it may not quite tick all the boxes but it’s an easy-watch and the perfect horror film for anyone who can’t stand the more violent side of the genre.

Available to stream now on Arrow