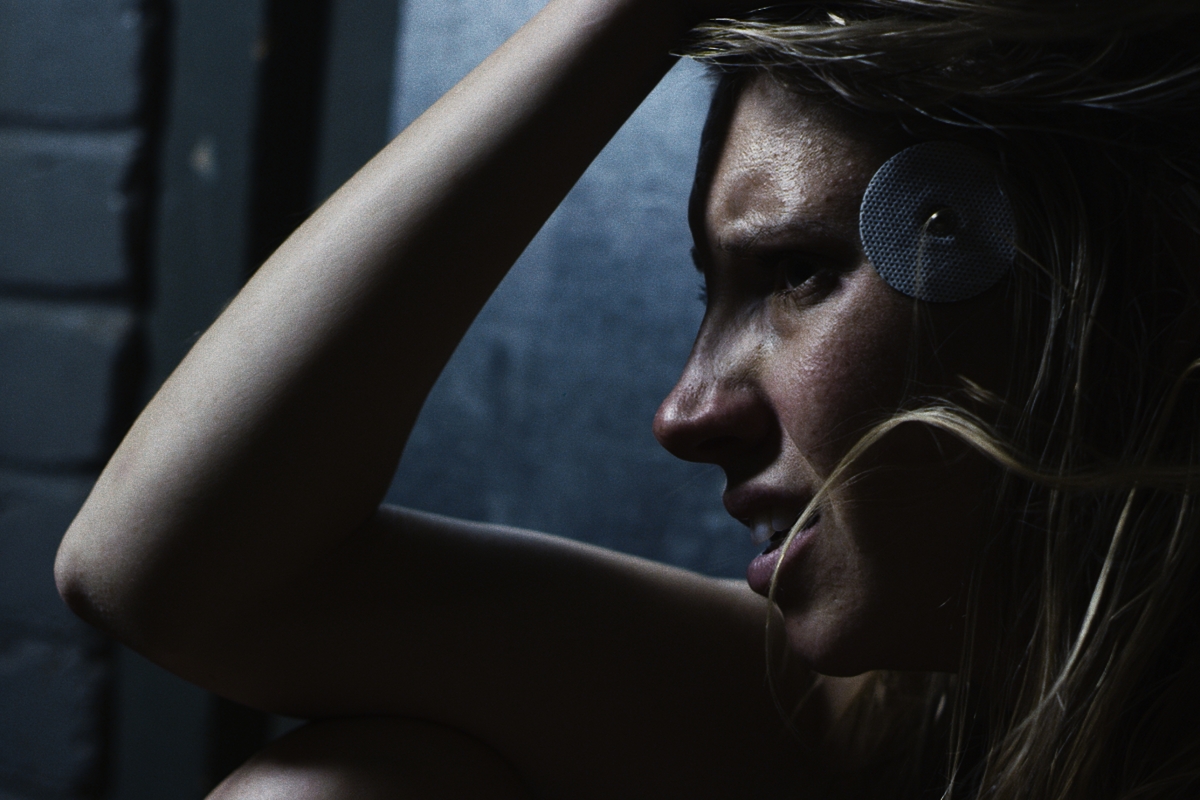 Written and directed by Terrell Lamont, in the not too distant future, a captive woman undergoes psychological and emotional testing by her abductor, as she tries to escape, she learns that he may not be her biggest concern. Starring: Holly Westwood, Matthew J. Plumb, Hal Whiteside, Devin Brooke and Adam S. Ford.

Opening on Ava (Westwood) shackled to a chair in a bare room, confronted by a bright light and completely alone, that is until she’s joined by a mysterious man in a lab coat who proceeds to forcibly check her vitals. You’ll likely be quickly wondering who she is, why she’s being held prisoner, and who it is that brought her to this place but they’re not going to make it that easy by throwing answers at you immediately, you’re going to have to sit back, watch and find out. It reveals itself gradually, allowing you to slowly get to know Ava and her backstory, keeping the focus on her struggle and survival, not her mysterious hosts.

Given that the spotlight remains on Ava for the majority of the film, it rested on the shoulders of lead Holly Westwood to see the audience through and that’s exactly what she does. You’re taken through the events via Ava’s eyes, Westwood holds a great vulnerability to her that’s easy to sympathise with but still makes you aware that underneath her fragile exterior, there’s a fighting spirit. It’s a very emotional role but Westwood handles it gracefully, she doesn’t become over dramatic or try to push too much on the waterworks. Hal Whiteside was a great choice in the supporting role, he does a brilliant job of creating a mystery to his character and holds a likability despite helping to hold Ava captive. He’s a surprisingly light presence, which works remarkably well against the dark nature of the role and overall, just a great addition.

The direction, cinematography and location choices all work together to create a very intimate yet vague environment, it gives you very little to grasp onto for clues of where its heading. It restricts itself in the space it uses, which very effectively creates a claustrophobic environment for Ava, and the choice of shots keeps an extremely strong focus on the lead. There’s an interesting balance between the coldness of the setting and emotions that you watch Ava go through, it works very well and hits all the classic notes of a captive story. It also has some small details that do give you an idea of the situation and represent the film taking place in the future, it’s always a nice touch when films do so in a subtle manner and don’t try to change the entire environment overcompensating for a futuristic style. Film fans will also approve of the repeated usage of famous film quotes, it also feels as though the outfit choice for Ava is a nod to Leeloo in The Fifth Element.

There are a couple of issues, in particular the sound mixing, the dialogue is often too quiet while the score is overly emphasised at times, it struggles to strike the right balance. There’s also one fight sequence which takes away from the otherwise well-done editing and adds too many cuts so you don’t get a clear image and feels wasteful for one of the few high interaction moments of the film. The ending may also be a divisive point for viewers, it’s far from the first sci-fi film to leave the big reveal to the very last second but it feels unsatisfying, it’s too expansive and vague for the very close, personal story that it has gradually built throughout. It gives you the option to let a lot of details be filled by your imagination so likely, it will work better for some than others.

Ava plays well on the strengths of not rushing through your story of letting it naturally reveal itself, while having a laser focus on its lead. The style does a lot with the little that it uses, the minimalistic settings and costumes all fit together smoothly to tell a story that has tension, suspense, danger and emotion. It sits comfortably between sci-fi and thriller, using plenty of notes from the former to enhance the latter, giving you a story of a woman held captive but bumping up the risk a few levels higher. Westwood and Whiteside work extremely well together, her high emotion versus his complete neutrality is interesting to watch. There may be a couple of loose ends that needed to be tied up to neaten out the film as a whole but for the most part it’s a captivating story with a great pace and a fittingly cold and mysterious yet intimate style.