From the director of Elles and In the Name of, Malgorzata Szumowska, comes this coming of age drama of a teenage girl (Raffey Cassidy) who has lived her whole life in a cult, with a band of isolated women, cut off from modern society and led by one man, known as Shepherd (Michiel Huisman). It’s the first feature for writer C.S. McMullen, and also stars Denise Gough, Eve Connolly, Kelly Campbell and Isabelle Connolly.

The first thing that you’ll likely notice when diving into this film is the striking cinematography, the vibrant colour palette against the backdrop of the forest is stunning. There’s an almost raw quality to the cinematography, it’s very clearly carefully created but it has an edge to it that feels natural and unfiltered. It starts so calmly and smoothly that it almost lulls you into a false sense of security, but there can’t possibly be a cult in existence where there isn’t some craziness bubbling under the surface with the level of fanaticism involved, and this is no exception. 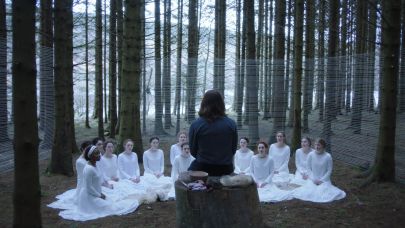 One of the fantastic things about The Other Lamb is that throughout it introduces different elements that tell you about the cult, one of the more simple but very effective touches is having endless string tied among the trees where they live, it’s surprisingly sinister for something that in any other situation is entirely innocuous. There are bursts that really give a kick of a reminder that what’s happening before you, saw normal in the rear view mirror a hundred miles ago and never slowed down, but again they’re not all thrown at you at once, or trying to use shock tactics, which inferior filmmakers choose, instead you have a film where Szumowska curates an experience that has all the necessary factors, it keeps you wondering, with just enough discomfort to set you on edge and seeing things through Selah’s (Cassidy) eyes brings that sympathy and investment in the group. 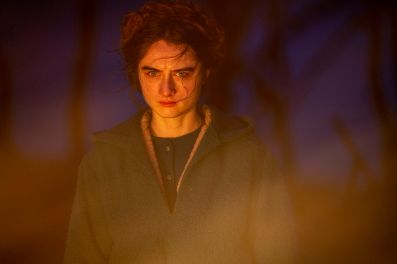 You’ll be familiar with Raffey Cassidy if you’ve seen Vox Lux or The Killing of a Sacred Deer, she’s building her way into the limelight and this film has a fantastic showing of her potential, at only 18 she’s at the beginning of her career but it looks to be a bright future. Her performance is beguiling, she’s so young and her sheltered life has left her naïve but it’s easy to see that there’s a lot just under the surface and you’ll spend the whole film dying to see her burst out of that shell. Whereas Huisman is almost unrecognisable in this role, it’s far from his previous romantic roles so get ready to dislike him because his performance is certainly more than good enough to make you hate Shepherd, if you can watch this film without constantly willing for his demise then you should probably consult a therapist.

Despite the fact that the film follows a cult which is extremely far removed from daily life, at its core it has a very everyday story that all women will be able to empathise with and be very grateful that this story was lovingly handled by female filmmakers. There’s a large chunk of this story dedicated to Selah getting her first period and how that experience is obliterated and exaggerated by being in an environment that has extremely biblical, old testament opinions about women, especially when this young woman hasn’t ever experienced anything else and doesn’t know better. Having to deal with the confusion and fear of that first experience while not having a safe, nurturing environment is something that no woman should have to go through but this film handles a version of that in a way that combines the universality and specificity in a beautifully balanced way.

It’s fascinating to watch these iterations of cults that value motherhood and sisterhood above all else, but are always led by men because the women are too downtrodden and emotionally abused to realise that they hold the power. It creates that immediate desire to see the women rise up and realise their true worth, which is a great way to pull you into the story and is enormously effective. It’s also an interesting blend of the cult having biblical values but not necessarily being overly religious, their religion more so simply being to follow Shepherd.

Its score is something that doesn’t jump out at you but it’s consistent and pops right at the necessary moments and while it could be considered relatively understated, it does exactly what it sets out to do. In fact it’s more well suited to an understated score given that the film has an eery quietness to it and having a more overpowering score would have ruined that atmosphere. It’s one of the several indicators that show the care and detail that went into creating the film, one of which also being the different women wearing different colours depending on if they’re a wife, elder or younger, it’s very à la The Handmaid’s Tale and fits in perfectly with the cinematography’s great use of colour.

If you were looking for a comparison to get an impression of The Other Lamb, you could potentially put it somewhere between The Witch and Martha Marcy May Marlene, having the more sinister elements of the former mixed with the intimate drama of the latter. This film has several surprises in store and one of them is the slight edge of comedy, it’s extremely unexpected but a welcome inclusion. There’s a more universal story hidden beneath layers of mystery, intrigue and fanaticism, which perfectly blends the drama with horror, leaving the film superbly balanced between the two. The direction is brilliant, the writing is riveting, the acting is captivating and the cinematography is stunning, but to add to all that, it’s different and brings something new to a film about a cult.

The Other Lamb is available on VOD from Friday 3rd April –