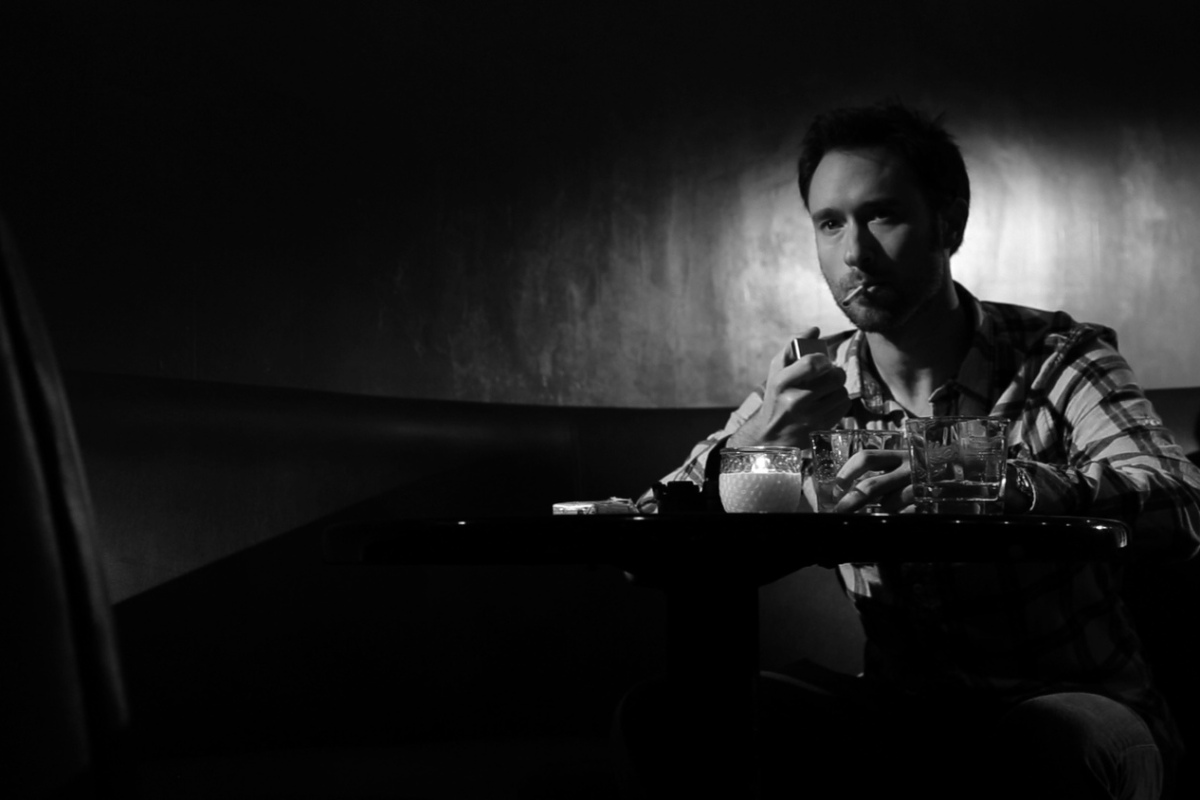 Short and indie films have become a much larger part of Film Carnage and it feels only appropriate for my 200th review written here to be another short film. A obsessed loner gets embroiled in a murder scheme after he finds the object of his affection dead on her kitchen floor. From Sunshine Boy Productions, directed by (and also starring) Matt Mercer, written by Kevin Sluder and also starring: Najarra Townsend and John Paul Romeo.

As soon as the film begins, the noir theme is in full force; the close up shot of a cigarette being lit in glorious black and white, the smoker sat alone in a bar drowning his troubles in whiskey, it’s terrifically nostalgic. Although the checked shirt is definitely a much more modern choice, not something typically worn by Orson Welles or James Stewart in their heyday so you won’t find it hard to know the film is taking place in the present. As things bloom into colour, the story takes a step deeper, giving us a tale of romance that’s tinged with sadness before things get more deadly and mysterious. The conversation that ensues with Foley (Mercer) and Lyla (Townsend) feels much more like a homage to classic noir than suited to the modern setting, there’s a few clichés being batted around in the dialogue but they at least serve a purpose.

As more is revealed as to how Foley found Violet’s body, what happened to her and why he was there, things get interesting and it works really well in the sense of using a plot where you never know who to believe or what the truth really is, it’s all about your perception of what happens in front of you. During which the camera consistently remains close, it keeps the tension of the story going strong throughout and even when it has finished, you’ll still be unsure what really happened. Tension which is supported by a suitable and not too heavy handed score, to even further emphasize the suspicious nature of the situation.

Play Violet for Me achieves a very important aspect for short film, creating a story that has plenty happening in spite of the limited running time, not only that it allows your imagination to keep churning after the film has finished and decide for yourself what the truth is. It’s well scored and creates a great suspenseful atmosphere, a nice homage to classic noir while bringing it more into the 21st century. It’s a captivating story of anticipation, mystery and murder.

But you don’t have to take my word for it, check it our for yourself:

One thought on “Review: Play Violet for Me”