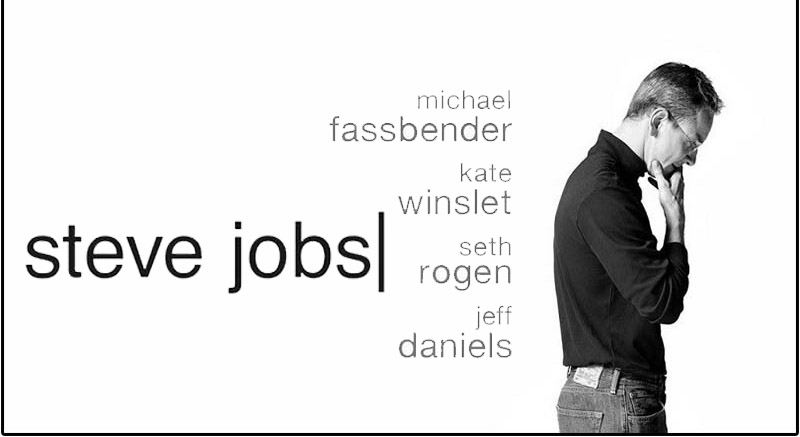 In all truth, as I already pointed out in my preview for this month, this isn’t a film I was particularly enthusiastic about, there just wasn’t really anything that drew me to the story but I did hear very good things as it got to the release so I gave it a go, and I’m glad I did. There are few that don’t know the name Steve Jobs and even fewer still that aren’t familiar with Apple and their ever growing (in number and in size) products. Danny Boyle and Aaron Sorkin however have been clear that this is not a biopic, we do not get a chronicle of Steve from birth to death; instead it is the depiction of three very critical moments during three launches of products that shaped his career and the man himself. Said man is tackled by Michael Fassbender, with an impressive team behind him: Kate Winslet, Jeff Daniels, Seth Rogen and Michael Stuhlbarg.

Fassbender may not look inherently like Jobs but it definitely does not take anything away from his performance, realistically it’s not necessary for him to look like an exact double of Jobs but rather just not enough of a difference for it to become a distraction. I can’t confess to knowing much about the man, definitely not enough to be able to give a verdict on whether Fassbender has managed to embody him or not, but what I can say is that he gives an electrifying performance and certainly captures Jobs’ ability to grab an audiences attention. It’s an utterly compelling story that even without the power of the legend behind the man, could still perfectly stand on its own. It may not be a completely flattering view of Jobs but it’s a more honest take, instead of just a dedication to his genius.

Winslet’s performance as Joanna Hoffman is almost strange in the sense that the entire focus of the film is constantly on Fassbender, her part is huge and some of the most critical and best moments occur between the two of them and yet somehow she’s still pushed to one side; which speaks more to the power of Fassbender’s performance than any lack on Winslet’s part. The more surprising is Seth Rogen doing a great job as Steve Wozniak, in one of very rare serious roles for him, he shows us he can do more than just make distasteful jokes, and be the guy who smokes a lot of weed. It may sound generally as I’m being over generous but this is just a good bunch of actors, Jeff Daniels of course is dependable as always which really doesn’t even need to be said.

I do have to concede that the hype for this one was justified, so much is going on and yet you’re only witnessing a mere couple of hours of his life. The style of the film, with sharp quick cuts between past and present works so well to give context to conversations and develop the characters without having to take lengthy detours. It’s also perfectly clear despite those quick cuts what era each of the scenes are taking place, there’s no confusion as to when the events are taking place as can occasionally be the pitfall of films that switch frequently between different scenes. It also helps to keep the pace of the film moving, instead of a classic linear telling of the story it is constantly moving making the story more interesting. Boyle may already be a respected director but this is another level, the choice to collaborate with one of the world’s best screenwriters, Sorkin, was possibly one of the best decisions of his career. It’s a great film, with a respectable 2 hour run time (especially notable these days), definitely one that you should check out…even if you’re team android.

One thought on “Review: Steve Jobs”