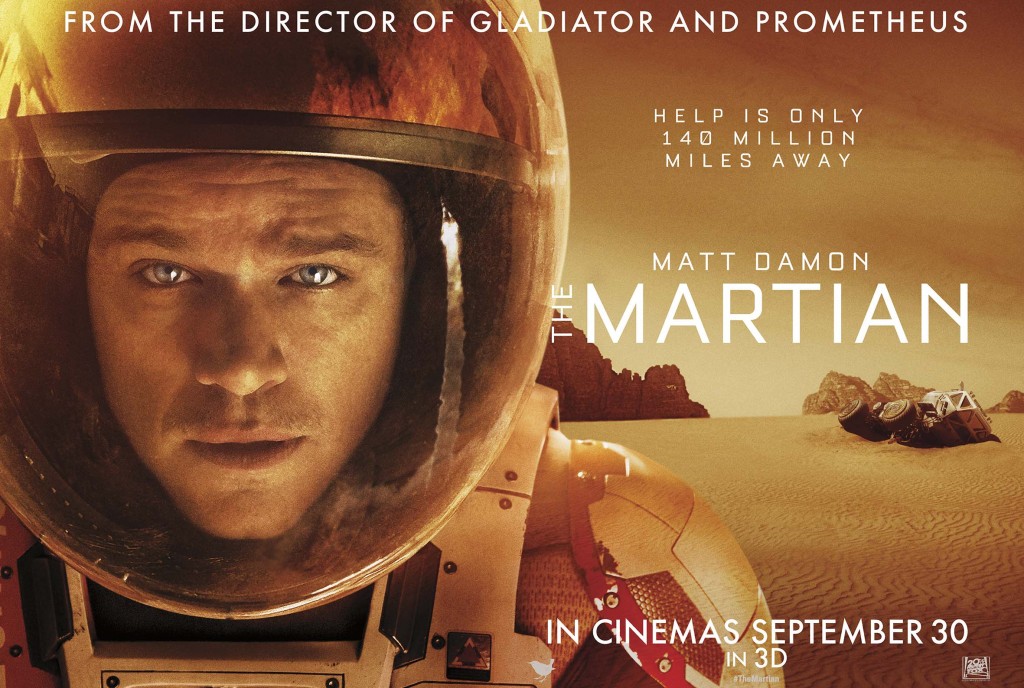 From the director of Alien and Blade Runner Ridley Scott, comes The Martian; a film about astronaut and botanist Mark Watney (Matt Damon) who is assumed dead when injured in a storm on Mars and left behind by his crew mates, only for the world to discover that he is in fact alive and now stranded on Mars. With only a limited supply of food and a planet where nothing will grow, how can he survive long enough to be rescued?

Of course with a film about one man stranded you would be within your rights to fully expect two and a half hours of a Damon fest, but the film is surprisingly a huge team effort with so many recognizable names taking part; to name a few Jessica Chastain, Kate Mara, Michael Pena, Jeff Daniels, Kristen Wiig, Sean Bean, Chiwetel Ejiofor, and Sebastian Stan. The cast is exactly what makes this film good, yes it’s set in space and there’s some wonderful elements aesthetically but the people are what’s key. It is such a blend of different actors of all backgrounds that it’s so strong, everyone has their part there’s no one that is really superfluous; as can often happen in a film with a lot of big names. With all the characters spread out amongst various cities, countries and planets, it gives each of them their own element instead of just throwing everyone in together without any solid places. Particularly Chastain gives a great performance, doing Interstellar before this, she wasn’t new to the genre but this time around she could really have more of a part in the story, rather than a passenger to it. Though I do have to talk about Matt Damon, obviously, his performance is mind-blowing it’s funny and heartbreaking and there’s hope and sadness and a huge amount of different aspects and emotions all thrown into one man. The film puts you through the (hate to use the word but…) journey that Watney goes through, and makes a character that’s so relate-able it’s the whole heart of the film and rightly so. Being a film all about bringing home one man, it has to be a man who you want to root for, and that’s accomplished without a doubt. As a side note **spoiler** (though not really) Sean Bean does not die, good for you Sean.

As I’ve already said the film is shot beautifully, and the story line despite being predictable in the larger respect, it’s the details that will be the surprise and a pleasant one. The real difference with this film to other astronaut and space based stories is the humor, it has its serious moments but at the same time the film is really funny which is something no one has really done before. While there’s a gigantic threat of death at every turn the film still manages to keep a light tone, it’s not dark and complicated; this may be a film full of geniuses but it’s not overbearing. There’s a real combination of it being extremely clever but at the same time down to earth (excuse the pun) which is definitely successful. This is one that will be going straight into my best films of the year. With a film about overcoming all the odds to survive, it has no odds to overcome it is a fantastic film. There’s not that much I need to say about this one other than, go out and see it!

One thought on “Review: The Martian”