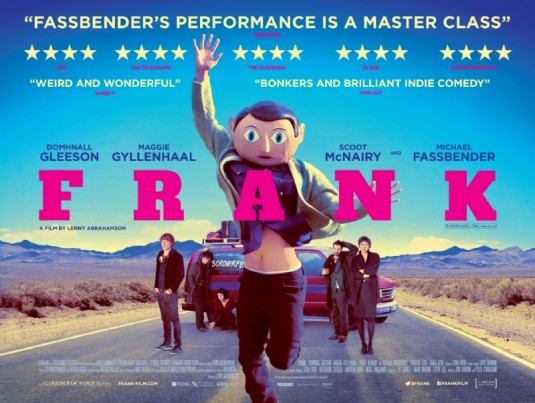 Going fairly unnoticed in its release both in cinema and on DVD, you would be forgiven for not knowing much of Frank so allow me to tell you. Frank is very loosely based on the character of Frank Sidebottom created by Chris Sievey, a man who at all times wears an over-sized papier mache head upon his own. Young aspiring musician Jon (Domhnall Gleeson) in very unusual circumstances happens to find himself the replacement keyboardist for a little unknown band called The Soronprfbs (best not to try figure out the pronunciation and just move on), the lead singer of which is Frank (Michael Fassbender), a strange character of very unique proportions, which can be said of all the members of the band. A story of some who just don’t fit into the normal mould.

Fassbender may not be able to give us his whole acting force for this one, with his face constantly hidden underneath the mask, but don’t mistake that as a reason for it to be a lesser performance, it certainly is not. He has rocketed to the top of the list of in demand actors of the last few years moving from little remembered series Hex to gracing our screens as Magneto, but his career is still very much diverse. He does a fantastic job of presenting Frank with the restrictions he has, still managing to show the many sides to the character; being cripplingly shy at the same time as outgoing and uninhibited. You may not be able to see his face but he more than manages to convey Frank’s emotions, as well as his own clear acting skills.

The focus however is not on Frank but on Jon our young musician trying to find his place and his signature sound. Gleeson is the dependable nerdy, socially awkward, slightly goofy guy who is really just trying to fit in and take all he can from these people who are so different than everything he’s known. Really his place is that more of a conduit for the audience to get a first hand experience of the band, though he definitely has a big part to play. Another notable name is Maggie Gyllenhaal as Clara, it’s apparent from the outset that each of the band members has their own issues but Clara may top them all, with her constant anger and outbursts you never quite know what she’s going to do next. Though the Gyllenhaal name may extremely recognizable, she is certainly un-recognizable in this role and is the perfect example of the variety that she has shown throughout her career.

Frank is the epitome of a quirky indie film, perfectly encapsulating every element; the characters, the locations, the dialogue and general atmosphere. Though the circumstances in which Jon is introduced to the band, being a witness to their last keyboardist attempting to drown himself and being carted off to a psychiatric facility, it does quickly give you a sense this film will not be the smoothest of rides, there are plenty more bumps to come. It may be indie about a small band but there’s nothing inherently small about this film; there’s plenty going on. One criticism would be that these characters are thrown at you and you learn a little about them but there is so much left unsaid that you don’t learn it leaves a slight gap making the film seem as though it’s almost just a brief look rather than a in-depth study of the characters.

Overall it’s a fun and entertaining film about some rather strange, but infinitely interesting and un-boring people.