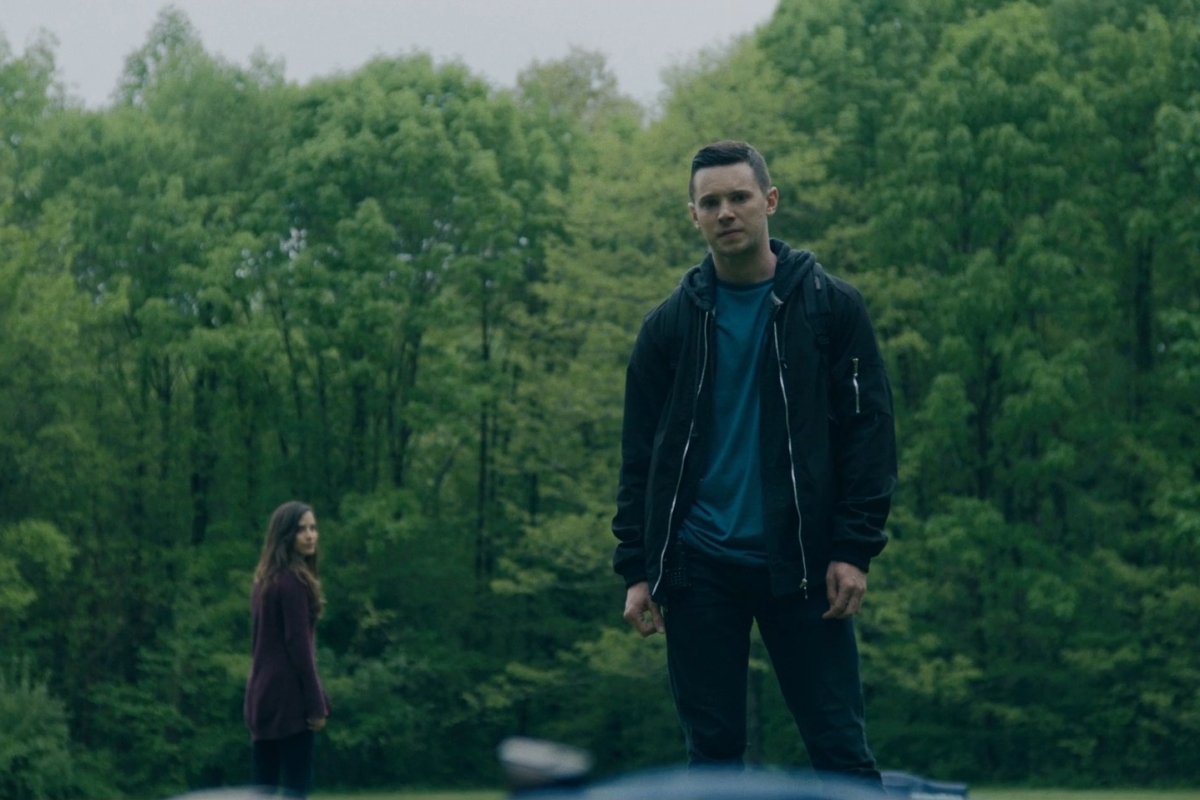 Written and directed by Henry Johnston, when a mysterious and impenetrable chest opens for the first time, a young man becomes inexplicably trapped in the woods along with his spiteful mentor and a strange woman with ties to a local cult. Starring: Tyler Ross, Sonaz Izadi, Sierra Miller, Andrew Oliveri and Bradley Grant Smith.

The opening of this film immediately displays the strongest element it has to offer, its visual. It has a classic slow moving angle on a singular spot with a great score over the top creating a tone of mystery and curiosity, immediately sparking your intrigue. Using natural locations is always a superb way to build an atmosphere and this is no exception, it adds a huge amount of value to the film. Johnston’s direction is solid throughout, it not only takes advantage of the location but also manages to touch upon a lot of familiar style. It hits some traditional notes in creating suspense with well balanced shots, as well as having patience in how the camera moves.

That visual quality holds up remarkably well when you take into account that the story isn’t quite operating at the same level to back it up. That initial intrigue does remain but as it starts to piece together the puzzle, the pieces don’t quite fit. That’s not to say the story doesn’t make sense necessarily but that there’s something missing, it lacks a fluidity to the way it comes together, everything feels somewhat separated rather than strengthening with each new reveal. There isn’t a natural progression to things, the fractured way in which it presents the story works but it remains on the same level throughout, without a gradual rise in tension or suspense. It’s a factor that isn’t helped by how quickly it dives into the story, it doesn’t quite spend enough time establishing itself before jumping the gun. There’s certainly points to be made for how it challenges belief systems, in a similar way perhaps to Charlie McDowell’s The Discovery but it doesn’t hold enough of a grave or weighty presence for that element to open more of a discussion.

Ross however leads the charge well, creating a sympathetic, relatable character who’s easy to watch and a perfect perspective to view this story from. He gets to show a wider range of skills later in the film where it opens up his emotion and creates a genuinely touching moment. He’s supported well by Izadi as Ellie, we don’t get to learn too much about her but she has a strong personality and charisma, there’s a resilience and vigour to her that compliments Ross’s performance as David well. Miller, Oliveri and Smith all similarly give solid performances, there’s no weak link in this acting team.

Hum is well shot, creates a strong atmosphere and will immediately start digging at your curiosity. However, when it tries to dive deeper into its story, there’s something missing. Everything simply doesn’t move in a smooth, flowing fashion and keeps fairly to one note, losing out on the opportunity to create more intensity, tension or suspense. There’s some strong elements at work here but it needed a bigger impact or connection to its story to kick things up a notch.

Available now on VOD in the US