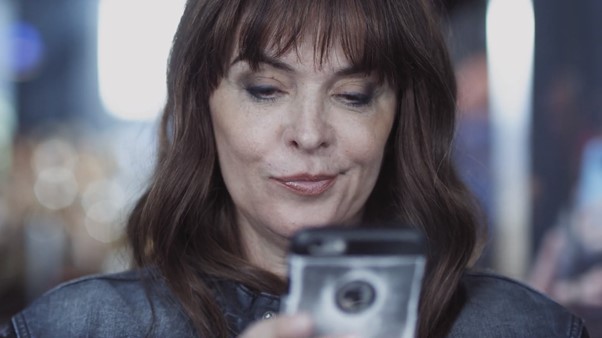 The immediate impression that the character of Samantha (Sciorra) gives is that she’s the equivalent of Liz Lemon, if she never got into comedy. She has the same concrete principles and intolerance for rude or loud people, but unlike Liz, she’s more on the aggressive side, she won’t just have a sharp word, she’s more physical and ready for a fight. It’s an interesting combination and she’s refreshingly frank but at the same time she takes a very long time to warm up to and there are a few aspects of her behaviour that are simply strange, such as an odd relationship she builds with a worm. It’s an issue with the film as a whole, there’s a certain energy or charm missing to get your more invested in the story.

The details about her musical career are actually surprisingly vague and often just the same detail repeated so it never really delves into her past but gives a touch of it to keep the idea of her former glory and unachieved potential alive. It still works as a motivation for the story but it feels like the one key element that would have given it a larger relatability or sympathy and it’s not strong enough. The directorial style is also quite simple, there’s no distinct personality to it, it feels like it’s playing it extremely safe. There’s a fairly dark edge to the story but the direction feels very light and easy-going.

Even with a very bitter, resentful attitude, it speaks to Annabella Sciorra’s performance that she still creates a character that’s easy to watch throughout. You get pulled in by her unpredictability, the brief moments of vulnerability and her general f*ck you attitude. There are moments that feel as though they’re trying too hard but that’s more a reflection of the writing than the acting. Robert Klein is a great touch as Samantha’s father, while the rest of the film does try at comedy, he feels like the only genuine addition to that vein. He’s got a strong personality, that has some very familiar traits and his hoarder living is just fun to watch. There’s a bunch of other supporting characters that pop up and give the film some variety, including Craig Bierko, Bobby Liga and Willie Garson but ultimately the focus still rests strongly on Samantha.

Before I Go is a nice attempt to create a mid-life crisis from a woman’s perspective but being written and directed by a man, it doesn’t quite get where it needs to go. The story feels forced at times and takes a few odd turns, it also doesn’t feel particularly comedic but is easy to watch and relatable in her annoyance of people who are too loud or text and drive. The performances are strong but it’s missing the right elements to pull it all together, airing more on the aggressive and eccentric side.

Available on VOD from July 20th in the US & Canada

One thought on “Review: Before I Go”