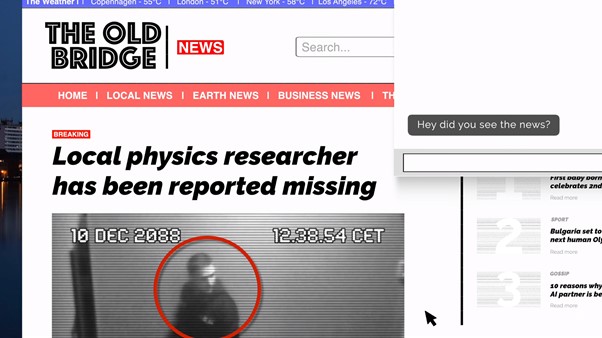 Written and directed by Toni V. Genov, set in the year 2088, two friends uncover the mystery behind the disappearance of a local physics researcher.

The unusual element of this film is actually the one that it’s missing, actors. The film takes place entirely via an online conversation and a couple of clips of video, essentially driving the whole story forward through texts. It’s a creative way to make a film on a restricted budget and it does work, it creates a growing suspense that becomes its driving force. There’s also a strong atmosphere of classic conspiracy theorist. It keeps the conversation moving, which is vital when there’s no outside influence to take any of the focus away from that one singular aspect. It does add in a little variety to expand the context to its story which helps slightly to prevent it from feeling entirely one note despite being extremely contained to one environment. The fact that it works at all is of huge credit to Genov but of course, it comes with its limits.

When you look at it as a whole, the story is simplistic, there are almost no details, everything is very vague so it doesn’t give itself the ability to make too large of an impression because there’s nothing to really hold onto once the credits roll. It’s effective but only to a certain extent, it should leave you with a sense of wondering who ‘They’ are and what sort of world they’re living in but it sadly can’t quite achieve that without a form of sympathy for these character that receive no introduction, names or faces.

One of the elements that helps the story to work is its use of music, the score that sits quietly stewing in the background, slowly moving forth adds to the suspense. It could have been used more strongly but it holds back, it helps to weave the pieces together and have something more tangible than just watching writing appear on the screen. It took the risk of the film feeling too cold by focusing solely on a screen but the score is one of the elements that helps to add some warmth.

2088 is an interesting and creative example of filmmaking on a budget, it shows what can be achieved without having access to actors and sets or any of the usual elements you might expect. It’s suspenseful and holds that typical conspiracy theorist feel. It has its limitations, as is understandable for what it’s trying to do and it could have added a touch more detail to make things feel less vague but the concept and execution are well done.

Make your own verdict by checking it out below,
you can also see a behind the scenes look into how it was made here