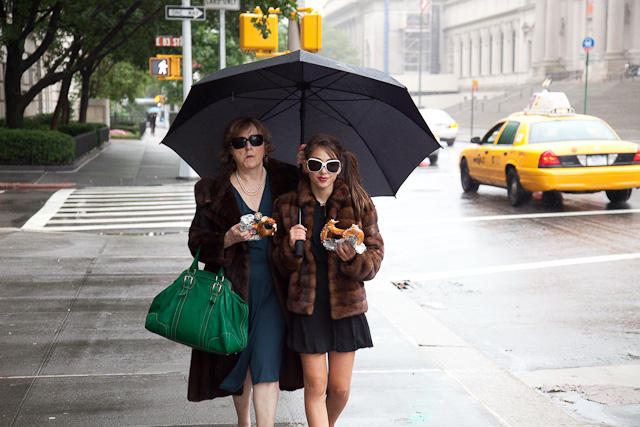 Written and directed by David Pomes, a thirteen-year-old girl develops an unlikely friendship with the eccentric next-door neighbour of her divorced father, who is ill-prepared for her New York City visit. Starring: Molly Learner, Annie McGreevey and Michael McMonagle.

The initial message this film sends is one of the old adage, don’t judge a book by its cover, assuming that your neighbour’s loud music and quiet persona are because she’s a rude, selfish old woman is only doing a disservice to both of you. You can never know the full story unless you take the time to get to know a person and Summer (Learner) takes the first steps to open up the mysterious Mrs. Von Mausch (McGreevey). The story then evolves into being more about how mental health issues are so vastly misunderstood and treated with detrimental prejudice. However, it does take a rather light approach, seeing the story through the eyes of a thirteen-year-old prevents it from going beyond the sadness to a larger depth. It held the potential for something more hard hitting in its dangerous possibilities but it stayed on a safer, adventure like path which works but it had more to give. It also misses the opportunity to explore the family life of Summer more when clearly there are problematic relationships at play.

Pomes’s direction sets up that classic New York, Upper East side apartment feel, having the edge of the city’s energy despite being contained in the building. It brings across Summer’s desire to explore and experience what it has to offer well, even while spending almost all its time in the apartments. The location and sets are well done to keep the feeling of wealth and privilege going. It keeps the story within a bubble, focusing on Summer and Mrs. Von Mausch without any interruption or influence from the outside world, very much as a child’s perspective would be.

Molly Learner’s performance as Summer is surprisingly understated, especially for a character at such a volatile age. There’s a kindness and curiosity to her that makes her very easy to sympathise with and she keeps the emotions of dealing with abandonment issues on a subtle level. Annie McGreevey is wonderful as Mrs. Von Mausch, she really captures the changing emotions and frantic behaviour to show the character’s mental health issues. There’s a childlike wonder to her but also a wealth of sadness in her confusion and loneliness.

Summer with Mrs. Von Mausch is a sweet, kind foray into separation and mental health but there was a deeper note to be hit that it misses out on. It only scratches the surface on the subject it tackles but it’s supported by sincere performances. It captures the feeling of New York without ever really needing to go outside, the direction does well to portray Summer’s wish to explore and of missing out on the city. There are solid elements at play here but it had the potential for something that would strike more to the heart.

Available to watch for free on Vimeo, make your own verdict by checking it out below

One thought on “Review: Summer with Mrs. Von Mausch”