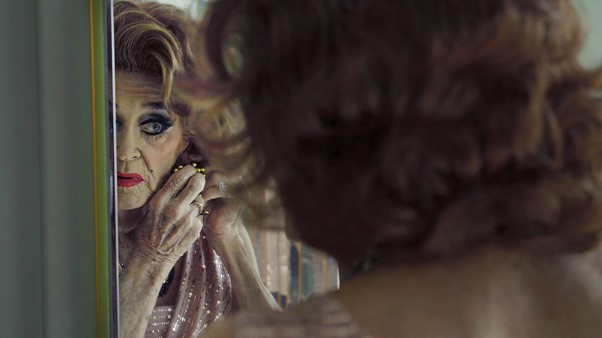 Written and directed by Michael Seligman and Jennifer Tiexiera, a cache of letters written by 1950s New York drag queens was discovered in 2014, now in their eighties and nineties, the letters they wrote bear witness to a time when gay community was hard to find. Starring: Michael Alogna, Henry Arango, James Bidgood, Robert Bouvard, George Chauncey and Claude Diaz.

Very appropriately, the first impression this film makes is a stylish one, having to centre a large portion of the feature around hand-written letters gave Seligman and Tiexiera the opportunity to get creative. The style that they chose adds a nostalgic atmosphere that fits perfectly with its exploration of the 1950s. It has a beguiling charm, feeling honest, open and raw, which may feel somewhat surprising to anyone expecting a more gossip focused, salacious viewing experience. It moves gracefully through its story, there’s almost a relaxing, comforting air to its atmosphere. It also doesn’t forget that after all, it is a film about drag queen so there’s no drab colours or long, over serious segues; it does justice to what they stood for and their joyous spirit.

This is another important example of the history of drag, that it has existed for many years before its relatively recent appearances in film and television. Its story shows the rich lives that these queens led, the importance of their friendships and the hardships that they endured. Through the letters, it also explores the significance of having someone to confide in, to be listened to and to connect with in a time where their presence was direly misunderstood by a society that rejected them. Having the immediate comparison with several of the former drag queens interviewed, now in their 70s and 80s reflecting on the past, it shows how valuable and impactful that time was for them. It’s a rather emotional experience as they wander down roads that had been, as far as we know, untouched for decades. Their stories are fascinating, in particular when it turns to a more criminal endeavour, the theft of expensive wigs from the New York Met; it feels like a very much off the cuff telling, it’s funny and engrossing but again, it’s also surprisingly emotional.

While its use of the letters certainly sets the tone, it’s the interviewees themselves that are the heart of this film, while some of them may no longer be drag queens, they’ve never lost their cheeky, confident, sassy demeanours. It’s an inspiring thing to watch, getting to that age and being able to still have so much energy and joie de vivre is undeniably enviable. They have a fairly infectious energy to them, it balances extremely well with the larger emotional message and tone to the story, never getting too silly but simultaneously touching upon serious topics without ever getting bogged down by them.

P.S. Burn This Letter Please is a testament to drag, to the relationships that it creates and the positive impact it can have. When films like this, or any form of media, come around that show the history of drag and how far back it goes, it feels surprising and that’s not because it wasn’t always there, it’s because it’s rarely explored. It’s emotional, sweet and funny with the edge of a sharp tongue and a pure joy to see former queens retaining their passions sixty years down the line.

Reviewed as part of BFI Flare