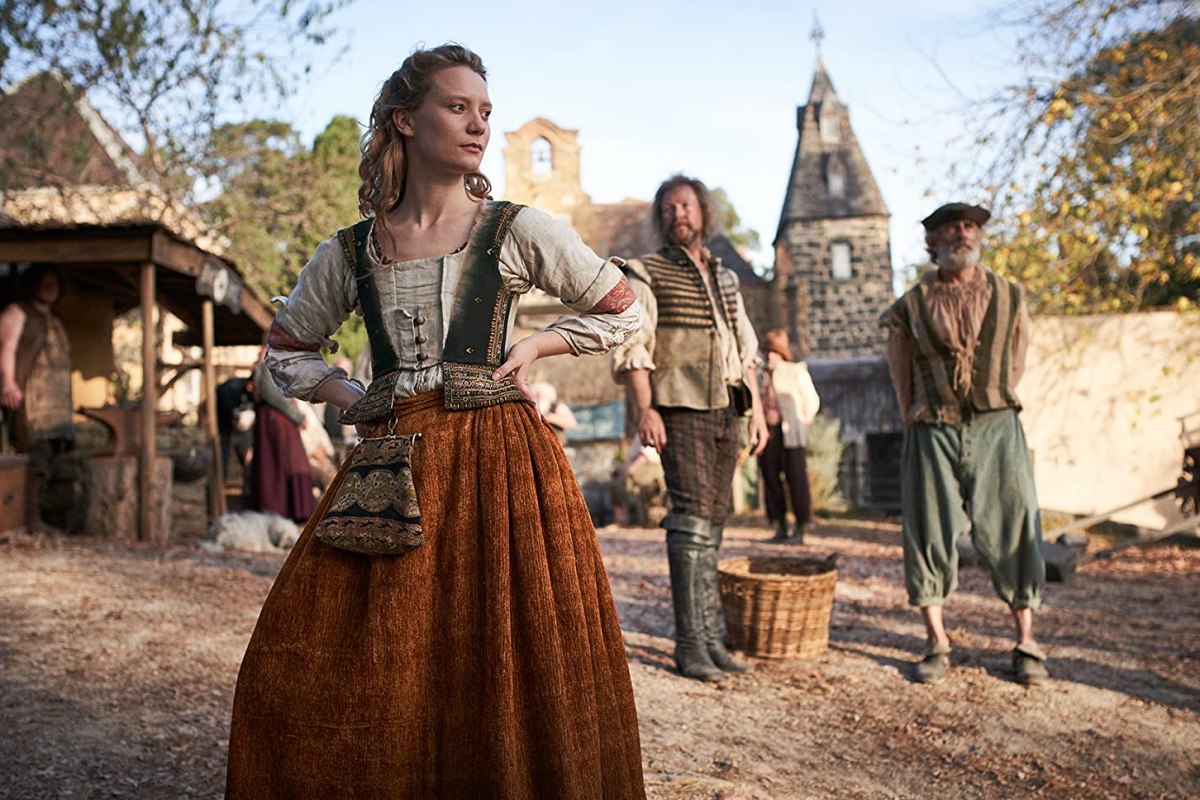 Written and directed by Mirrah Foulkes, puppeteers Judy (Mia Wasikowskaw) and Punch (Damon Herriman) are trying to resurrect their marionette show in an anarchic town on the brink of mob rule but after Punch ruins her life in a drunken rage, she teams up with a band of outcasts to exact revenge. Also starring: Jacek Koman, Benedict Hardie, Tom Budge, Eddie Baroo, Virginia Gay, Lucy Velik, Amy Christian, Terry Norris, Gillian Jones and Kiruna Stamell.

Thankfully, children’s entertainment has moved on from puppets committing domestic abuse but it’s more than fair to say that in the 17th century Punch knew what his audience wanted and it was violence, retribution and a disdain towards authority. Right from the start the film captures a perfect macabre and dark sense of humour that permeates the film, it’s a more playful and adventurous style that’s not used often in today’s cinema. It sets the scene well within the first few minutes, it’s clear that the real talent belongs to Judy and she’s fallen into a classic trap of being charmed by a man with a way for words, only to realise that all he’ll do is hold her back. It builds the foundation strongly of how women were treated in those times, their town of Seaside is a particularly unpleasant example with stonings and hangings a plenty for any woman who finds herself in an unusual circumstance or has any skills outside procreation and cooking.

Wasikowska immediately provides a character that you can’t help but want to follow, she has a joyful, loving and generous spirit, a gentle soul that simply wants to use the talents she has to build a better life for her and her child, if she can only keep her husband sober long enough. However, after she’s utterly betrayed by her husband and her intentions turn to the vengeful, she’s equally as convincing with an unwavering determination and a slowly building darkness to her. Herriman’s performance as Punch will make you hate him, which speaks exactly to how well he does, for any viewers that don’t recognise him, you may have seen him playing Charles Manson in both Mindhunter and Once Upon a Time in Hollywood. He captures such a vindictive, unhinged, violent character, it’s everything you want him to be and there’s nothing to complain about. Watching their relationship implode and turn ugly is gripping, the way that their characters evolve after the tragedy may not be completely surprising but it’s fascinating to watch how different roads they take.

The writing is unexpectedly riveting, it draws you in with its dark humour and adventurous tone but then gives you a punch right to the gut to ensure your investment in their story and it most certainly works without question. It doesn’t just stick to one particular style, it has a lot to offer and while it could be said that it loses some of that earlier momentum once it enters its second half, it makes up for it down the line. It brings in a lot of interesting themes, violence and injustice against women, how banding together is more effective than alone to effect change and how easily influenced people are, whether it be by a charming man in the 1600’s or misinformation and hatred on social media, the parallels are quite clear and surprisingly relevant. It’s an unusual blend of drama and humour that perhaps lands more on the side of something like the classic Harold and Maude but goes a little darker and it works extremely well, it’s compelling from start to finish and it doesn’t disappoint. The tone changes as their characters do, Punch becoming frantic and scattered and Judy becoming purposeful and finding a community she can thrive in.

Similarly, the direction really takes on the tone of the story, it isn’t something that inherently jumps out at you but the quality is there and it uses a great variety of shots. It also pairs really well with Stefan Duscio’s cinematography, embracing the colour palette of its period. Something that’s helped further by the fantastic costume work and sets which actually feel somewhat unique despite being set 400 years ago, there are some individual touches which make them feel different than your average period piece. Another element that pushes the film further is the score, it takes a lot of classical pieces and modernises them just enough to really hit that more playful and macabre note but not pull you out of the era.

Judy & Punch has a brilliant macabre atmosphere which is seldom used these days, with films opting to go darker or more violent, whereas here they capture a great balance between humour, violence and drama, never going too heavy on any element. Wasikowska is on top form as usual, she gets to bring out a few different skills with this role but she presents Judy with such a generosity that it doesn’t disappear even when she sets out for revenge, while Herriman presents the perfect villain alongside her. It’s captivating, entertaining, surprisingly relevant and ends on the absolutely perfect note to round out the experience.