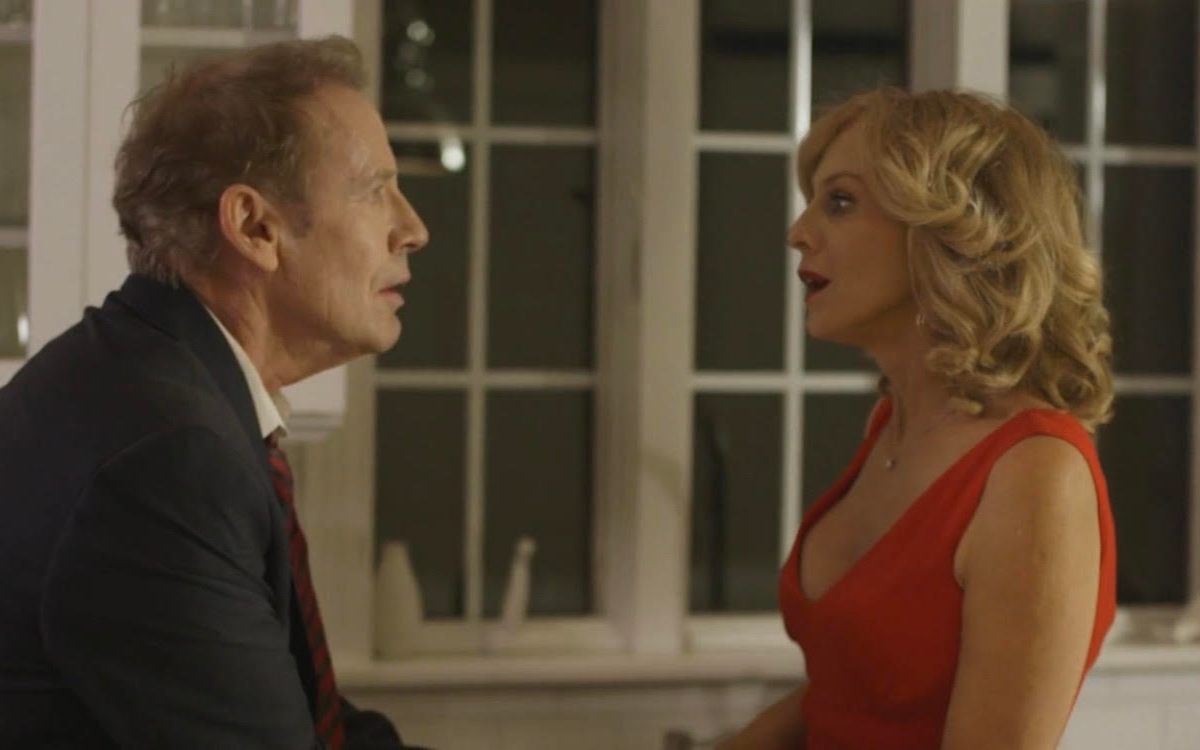 Written and directed by lead actor Steve Blackwood, based on a story by David Susman, George (Blackwood) and Helen Simon (Sandy Bainum) are a NY advertising couple who buy a sex machine to spice up their lives, but it comes with a crazed delivery boy (Max Schochet) who gets stuck in it on the night of their dinner with George’s clients.

The whole set-up of the film feels very much like a classic sit-com, from the 60’s feel score to the very familiar style of humour, without the heavy level of corny jokes. It’s a solid story to base a short film around and they capitalise on it, it’s not falling into the trap of labouring on one point, it’s varied and keeps a fast pace. The writing is sharp but it remains within an accessible arena, it had the option to go dark or edgy but instead keeps things more consistent with a classic sense of humour that has a smooth patter to it.

That consistency is also due to its lead actors Blackwood and Bainum who make a very convincing couple and they both hit the timing of the comedy very well. One of the really great things that pushes their performances is that they genuinely look as though they’re enjoying themselves, it’s not simply a frenzied rush to solve the problem, the characters embrace the hilarity of it. It stops the film from falling into territory of trying too hard, they aren’t crazed with worry over the possibility of their friends seeing a passed out delivery guy hung up in a sex harness in their closet, but they do accept the danger, it’s a good balance. It’s also supported by some great editing work (by Chris Esper) that gives the film a lot of movement, particularly in the opening, kicking things off on a more energised note. Mixed with the directorial style and the cinematography, the film keeps its momentum throughout matching the great pace of the comedy and keeping the high energy going from start to end.

One of the most surprising aspects of the film is that it delves into some more relevant territory, not the unconscious man trapped in a closet but of the forced adult friendships we find ourselves in. Whether it be because of work or otherwise, there comes a time where you feel obligated to continue social engagements with people purely because you run in the same circles, which then easily lends to presenting a different persona to impress these people you don’t care about. It’s a vicious cycle but an interesting addition to the film, bringing in a message about throwing that superficial relationship away to simply be yourself. It would have been easy to just keep the focus entirely on the humour but that addition of a relevant element adds another layer to the film.

Stuck is funny and fast paced, the comedy is consistent and never gets near any realm of feeling one-note despite its limited time. It feels like it’s an episode plucked from a sit-com about a quirky couple who look bland from the outset but have some interesting hobbies. Blackwood and Bainum make for a fun couple to watch scrambling around to figure out what to do with the unconscious delivery guy in their ‘love trap’, which keeps a solid momentum going throughout. In the end it leaves you wanting more, wondering what else these two could possibly be getting up to.