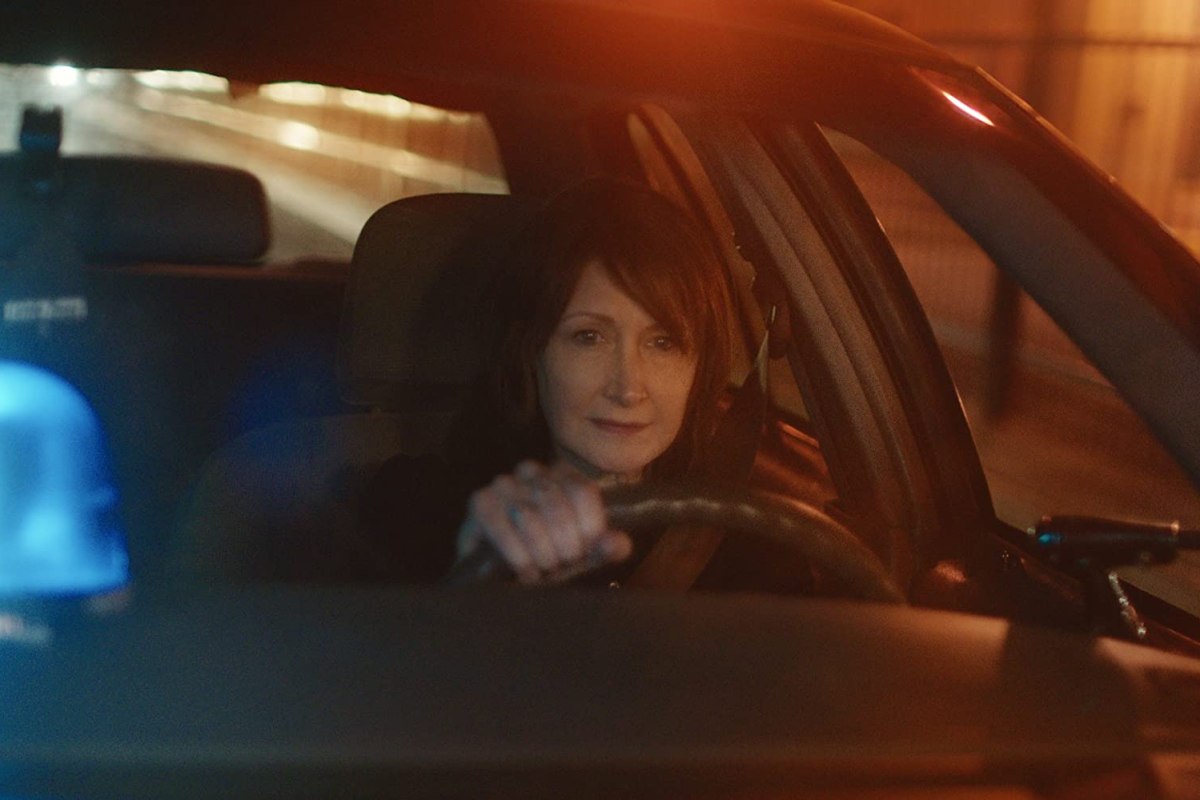 Written and directed by Carol Morley, based on the book ‘Night Train’ by Martin Amis. Detective Mike Hoolihan (Patricia Clarkson) is called to investigate the shooting of a leading astrophysicist and black hole expert, Jennifer Rockwell (Mamie Gummer) but finds herself affected by the case in ways that she struggles to understand. Also starring: James Caan, Jacki Weaver, Toby Jones, Aaron Tviet and Jonathan Majors.

The fact that this film took a book that was a parody of detective novels and then adapted it into a mystical crime drama with no sense of humour or personality, gives you a very clear picture of where it went wrong. Even from the word go the film feels stiff and forced with its cliched police set-up and unoriginal dialogue. It feels like a made-for-TV movie and has about as much style as you’d expect from one. It’s unfortunately bland from start to finish, extending past the visual through to its characters, there’s nothing to grab you or even slightly draw you in, with a story that should immediately do so, given the age-old obsession with crime stories.

Having Patricia Clarkson as the lead, was a fantastic idea, despite showing off her skills in such roles as Adora in Sharp Objects or Emma Stone’s eccentric mother in Easy A, she’s rarely given the reins. Whatever role she ends up with, no matter the size, she’s charismatic and compelling, which is what makes it so surprising that this particular one is missing that entirely, all her presence is eradicated as Mike. They give her a classically messy, slightly butch look then pair it with some awful make-up, which may be intentionally bad but given that it permeates the entire cast, it’s unclear, it all adds up to a strange mix. Her potentially abusive past is eluded to and you can see the attempt to make her an embittered detective but there’s characteristics to her that are childish, fragile and lacking in a sincere confidence which all clash against each other. The rest of the cast is a mixed bag, while none of their performances are bad, the characters are equally as odd as Mike; Tviet with his inappropriate outfits and nonchalant attitude, Gumer’s overly philosophical and sentimental spouting, Jones’ eccentric professor and Weaver’s grieving yet hyper mother. Each problem signifies an issue with the writing, the actors do their best with what they’re given but for the most part they’re one dimensional characters, thrown a pinch of individuality but not enough to round them out.

The characters are far from the only issue the writing has, the story itself is a mess of forced sentimentality and tortoise paced plot. It takes so long for it to get going, that by which point most of the audience has probably already lost interest. For a detective story, it lacks the ability to create an investment in the victim or potential killer, it’s far too insipid when focusing on existentialism to make a real impression and there’s no solid attempt to build tension or suspense. The journey to get from mystery to solved is unsatisfying, bumbling along without a clear aim or solid tone. It pushes for a depth or pensive aura but its intentions are so transparent that it simply ends up negatively impacting the film. The way that they tried to introduce trauma as a backstory is ineffectual and takes away focus when it was already weak.

Out of Blue comes across as pontificating, forcing its existentialism and sentimentality into a messy story that lacks a clear direction or strong themes. It’s lost any sense of possible satire it could have pulled from its source material and the result is something stiff that takes itself overly seriously but without any intensity or tension. It sadly does an injustice to Patricia Clarkson’s talents and has no particular element that works quite as it should. Perhaps most disappointingly for a murder mystery, it’s entirely unsatisfying to watch, there’s no rewarding reveal or decent resolution in sight.