A lost driver (R.G. Parker) roams onto a desolate road on the outskirts of a remote chemical plant, where an accident has left dire consequences for the local populous…and the driver. Also starring: Megan Robson, David Graham and Daemon Lee, written and directed by Philip Martin.

When you have less than 5-minutes to make an impression, it’s often filmmakers feel a pressure to throw everything at you at once, cram as much in as possible but one of the most impressive things about The Road is its restraint and refusal to fall down that rabbit hole. The film actually goes in the opposite direction and has a slow, suspenseful opening that gives very little away. As soon as you hear the words ‘accident’ and ‘chemical plant’ in the same sentence when you’re talking about a film, you know things are doomed but they’re always especially doomed the second that a character stops and gets out of their previously very safe vehicle.

The film plays out nicely, it doesn’t try to go too far with the violence or gore, it keeps things reined in and leaves most of the blood and guts to your imagination. It also has a couple of much appreciated dark comedic edges, particularly one of the infected (Daemon Lee) wearing a t-shirt adorned with the word ‘vegetarian’ is a very nice touch. There are many different categories that outbreak victims fall into but put more simply, there are fast zombies and slow zombies, The Road’s passengers could be classed as Shaun of the Dead level, they’re sluggish but deadly. There’s no unpleasant over groaning or stumbling, the difference between those infected and not is only slight but sufficient enough to make its point and adds just the right amount of violence to make sure it’s a strong point. The only detail that misses the mark is the moment the lead character puts on aviators, while wearing a thick jumper and it not looking particularly sunny, it has a feel of Andy Dwyer in Parks and Recreation when he’s being Burt Macklin; however, rest assured this makes no impact on the enjoyment of the film. 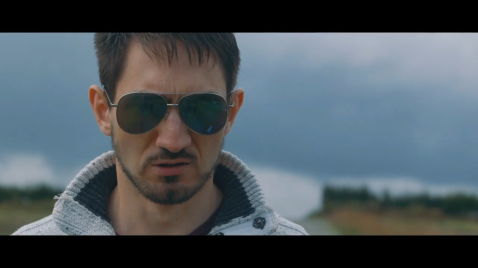 At this point in cinema history, there’s little ways that we haven’t seen the undead done for the entertainment of the masses so it’s impressive that The Road keeps it from feeling stale. It has a great blend of fear, violence, disaster and mortal danger, and accomplishes it in a very small amount of time and a tiny number of actions. An understated horror short that achieves a great deal in its 5-minutes.

Make your own verdict by checking out the film for free below!

One thought on “Review: The Road”