Written and directed by Sarah Barker, The Subject follows a young artist’s (Alice Bird) struggle to create the perfect piece of portraiture at a pivotal moment in her career. A feature with a cast and crew filled with female filmmakers, making it a truly independent, British, female made film, which we definitely need in 2019 and makes it the perfect film to be the first review of the year. 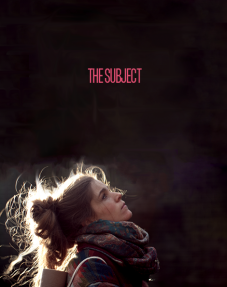 The opening of the film is a surprise but not because of its content, rather its quality, this being Barker’s first feature film and only second directorial project, the subtlety of its direction and cinematography is instantly impressive. It’s not often you find a developing filmmaker that has such a good handle on maintaining a light touch, not going too heavy with their cuts, too long with their shots or too over the top with their score and it’s delightful to see.

Another absolute pleasure to behold is the fantastic location choices, Francis Lee’s God’s Own Country brought West Yorkshire to the masses and while The Subject won’t be traversing its vast fields or farms, it shows yet again that Britain has more to offer cinematically than purely its capital and that Yorkshire is full of great locations yet to be tapped by the film industry.

There are three words that come to mind when watching The Subject: relatable, modern and real; this film gives us a female lead that isn’t embellished or exaggerated but someone you could see in reality. A lack of frills is one of the ways in which the film shines, its direction and cinematography pull you into Sally’s story and make sure that you become invested in what happens to her. She doesn’t need to be off saving the world by figuring out an antidote to a world-killer virus or finding out she’s really part of an alien race and it’s her duty to protect the citizens of [insert clichéd city name here], she paints, she has arguments with her boyfriend, she tries to figure out what she wants and it’s captivating to watch. There’s a quality of solace and melancholy that draw you in with quiet intrigue while in the background there’s a lingering ominous edge to the experience that makes you wonder just what may be on the horizon for Sally, mixed with her impending deadline, adds a perfect dose of suspense.

The modesty and subtly of the film is certainly achieved in no small way by Alice Bird‘s understated acting, too often in independent films do you find actors that lean on overacting or handle emotion in a grating manner which stop you from being sympathetic to their character but not in this case. The direction and style keep a contained focus on the lead and changes as Sally’s emotions rise and fall, keeping that air of suspense in play throughout.

The Subject is understated, stylistic and captivating, and a brilliant example of female led, British, independent film, which we need more of. A mix of subtle acting, sharp cinematography and engaging direction, be sure to keep an eye out for the film later this year and for whatever Sarah Barker has in store next.

You can find out more about The Subject here or check out the trailer below!