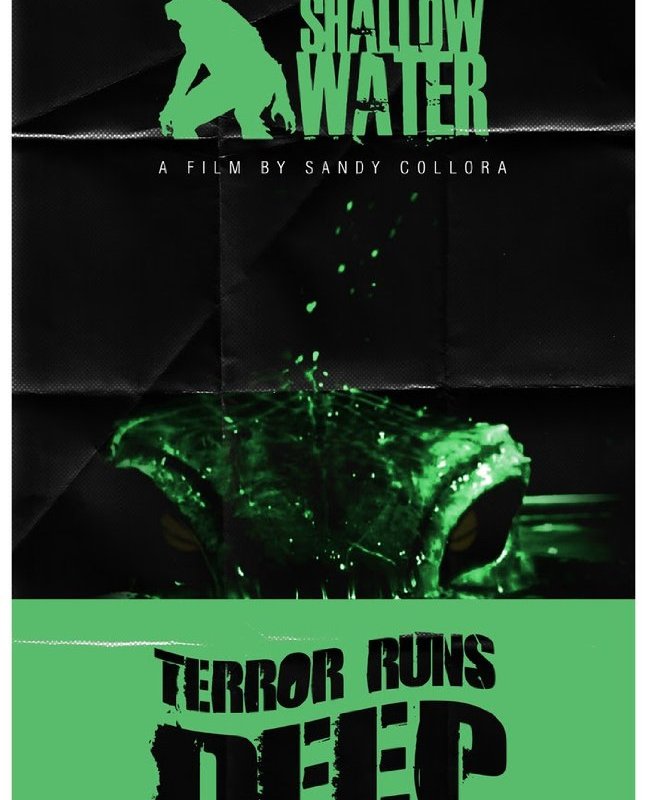 Directed, written and produced by Sandy Collora. A group of adventurers arrive at a fabled fishing spot in Mexico, only to realize that they are being hunted by a creature lurking in the dark, shallow waters and that help will not be arriving any time soon. Starring Lisa Roumain, Kurt Caley, Jason Liles, Todd Christian Hunter and Matt Cable.

The film closely follows the survivor of the group, Diane played by Lisa Roumain as she attempts to evade horror and death at the hand of the mysterious creatures, some of you may recognise Roumain from the brilliant short film Hurricane (full review here). A great deal of the film falls onto Roumain’s shoulders and she holds it well, she’s a strong lead, her terror and fear is the centre and scaffolding of the film, something that’s further supported by the choice of using a first person perspective. It propels the film into territory somewhere between Jurassic Park and The Blair Witch Project, throwing you into the action and augmenting the fear, it does at the same time make you want to pick up a controller and start controlling Diane as she runs from the creatures and search for weapons to collect but that’s not a insult in the slightest, it gives it a sense of fun at the same time.

With this type of film, there are certain elements that can make or break it; firstly there’s the visuals and Shallow Waters unsurprisingly has no issues whatsoever in that respect, there are some fantastic shots and the special effects work is top notch. Secondly there’s the audio, no film with sub-par sound work is going to scare anyone but in this case, it’s on edge, sharp and distinct. In those respects, the film does a brilliant job but there is one aspect that sets things into a different direction, as our mystical creatures (no that’s not a unicorn reference, the film is not an island plagued by evil unicorns but yes someone should write that) appear, the horror elements take a turn for the more adventurous rather than scary. The creature feels like a cross between the monster from The Creature from the Black Lagoon and the merman from Cabin in the Woods, although more akin to the former and not as terrifying as the latter. That moment redefines the whole atmosphere of the film and takes a side-step to sci-fi over horror, which although it isn’t inherently problematic, is slightly jarring. Given that director & writer Collora’s background is with films like Men in Black, This is the End and previous directorial work Hunter Prey, the physical design of the creature is not surprising but it comes across on screen as a character that wouldn’t be out of place in Doctor Who; again more adventure than horror.

Shallow Water is a mix of old school and modern, there are parts that feel typical and traditional, yet it has an edge of something different and unusual. The film gives you what you’d expect, while still having it’s own style; there’s also some really great cinematography work, especially in the final scene which has a beautiful backdrop, adding layers to the scene. It would have been great for the initial scare and terror to have continued throughout the film but the change of pace still has plenty to offer, Shallow Water is fun, tense and absorbing.