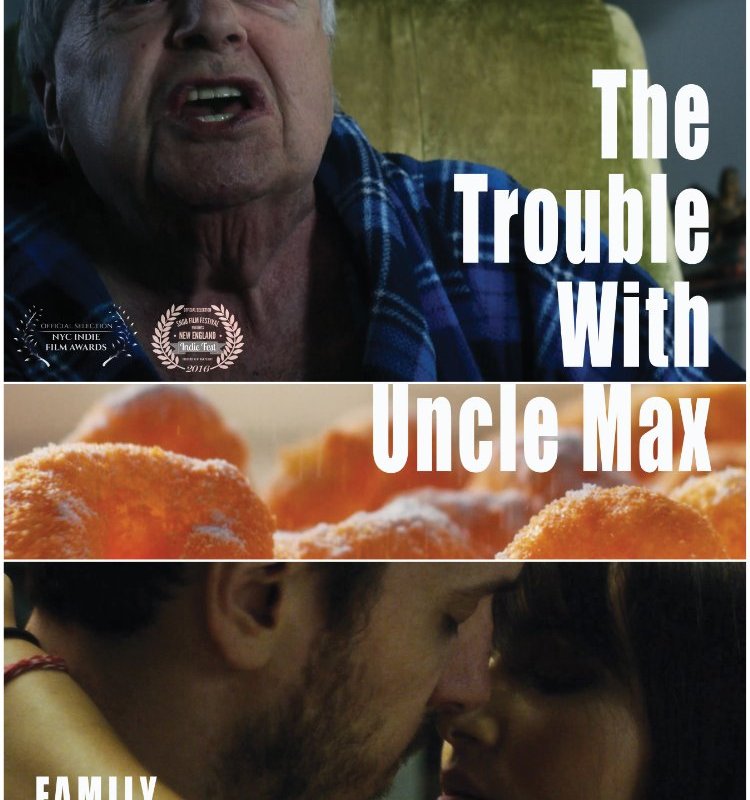 Two young lovers want to run away and be together but there’s just one thing stopping them, Sonya’s abusive, elderly uncle Max: she convinces Joe to kill him so they can disappear with his money. They think they have the ultimately perfect plan, until they realise nothing ever goes according to plan and murder is never easy. Written and directed by Rufus Chafee, starring: Arianna Danae, Nathaniel Sylva, Bill Taylor and Logan Lopez.

The film opens strongly, introducing us to the characters in a way that could make you believe this was just any other story, until it’s abruptly interrupted by the voice of Bill Taylor as Uncle Max and so it begins. The choice of song and editing almost makes it feel as though it’s the beginning of a music video, but perfectly sums up the tone of the film, as Joe (Sylva) nervously plays with his lighter and Sonya (Danae) attempts to forge cheques, it has a strong rebellious teen theme going on. Along with that, there’s hormones running high between the two leads which is luckily backed up with some rather nice, genuine chemistry between the two actors; even during the preparation to kill a man, their brains are still thinking about sex, following that same theme.

While Joe comes across naive and of the best intentions, Sylva steps it up in the moments where his character is put through a great deal of stress, although both Danae and Taylor do feel like they’re going slightly over the top in moments; it’s hard to decide whether Taylor’s performance is too over dramatic or if that simply helps the cringe-worthy quality of such a horrible, disgusting character. Danae on the other hand, purely plays it a little too cool and calm at times, it’s a line between sociopathic and trying too hard to portray her character’s rather arrogant traits, but it pays off in the story’s conclusion.

As the story develops and things begin to unravel, it surprisingly never takes a turn to a more dark or grim tone, it’s more impetuous and impulsive acts and the consequences when they go wrong, keeping that same theme going continuously and consistently throughout the film. It’s an interesting take on the concept, almost a modern day love story with perhaps more realistic results, it goes slightly light on the drama but it’s a good premise with a satisfying conclusion.

But make your own verdict by watching The Trouble With Uncle Max which is available to stream right now, don’t forget to check out the behind the scenes photos and Q&A with writer and director Rufus Chaffee: