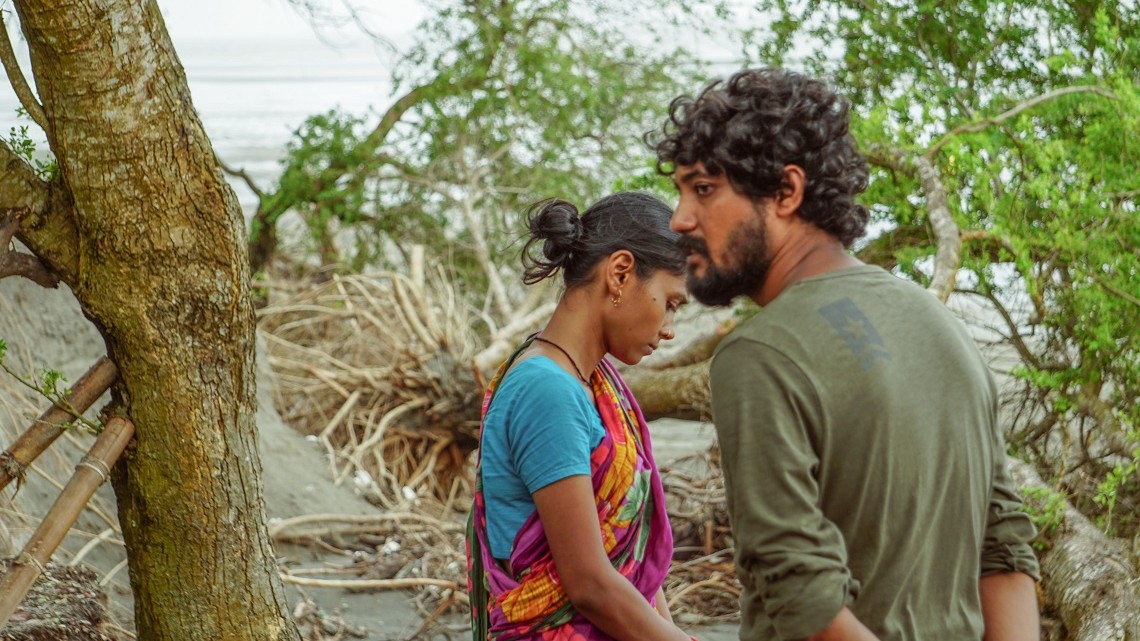 The film comes across quickly as unassuming and natural, it takes its time and is almost easy-going, it easily builds this unexpectedly charming air to it, which is helped in large part by Titas Zia’s performance as Rudro. Zia brings a very strong charisma, his creative, positive outlook is easy to watch and makes him very relatable and sympathetic, he wants to respect his heritage while embracing the modern world. The chemistry that he builds with Tuni (Tamanna), as well as the local children holds a lot of hope, potential and generosity, watching them interact despite the elders’ disapproval, is sweet. Tamanna’s performance as Tuni is similarly satisfying, she has a feisty, stubborn personality and she’s trying so hard to hide her feelings and frustrations but entirely struggling. She does really well to express the character’s difficulty with sticking to the traditions and patriarchy of the village while desperately wanting more.

It’s written in such a way that while it sincerely captures the superstitions and beliefs of the village’s residents and their reluctance to embrace modern ways, it remains entirely accessible. It presents this very specific, individual culture but brings it to the screen with ease, it’s not necessarily overt but there’s a quality to it that isn’t trying to make you work to bring out the emotions and tensions, they’re right on the surface. Part of that accessible nature is the performances by the ensemble of actors playing the villagers, there’s plenty of drama between them and Rudro but it thankfully never strays into melodrama, they present their distress but for the most part it’s still communicated relatively calmly and, in their own way, logically.

The direction follows that natural atmosphere, it moves thoughtfully and follows a smooth but gentle pace, though it kicks things up a notch when necessary. The cinematography (by Chananun Chotrungroj) enrichens the storytelling, it really captures the surroundings wonderfully, especially with the turbulent weather and isolation, it adds a more tangibly dramatic element to the atmosphere, while the writing and direction remain understated.

The Salt in Our Waters is one of those films that will take you by surprise with how captivating it is, it sneaks up on you how invested you get in the story and with Rudro’s relationships with the village’s residents. It’s understated, charming and has an overall positive air despite the confrontational nature of its story, it handles the cultural perspective in a graceful and accessible way that opens up this fascinating little corner of the world. It has a deceptive simplicity that really draws you in, especially being led by a very likable and charismatic performance from Zia. Its cinematography is fantastic and injects a sense of drama into its more simple-natured but personal and cultural story. It’s surprisingly sweet and unexpectedly compelling.