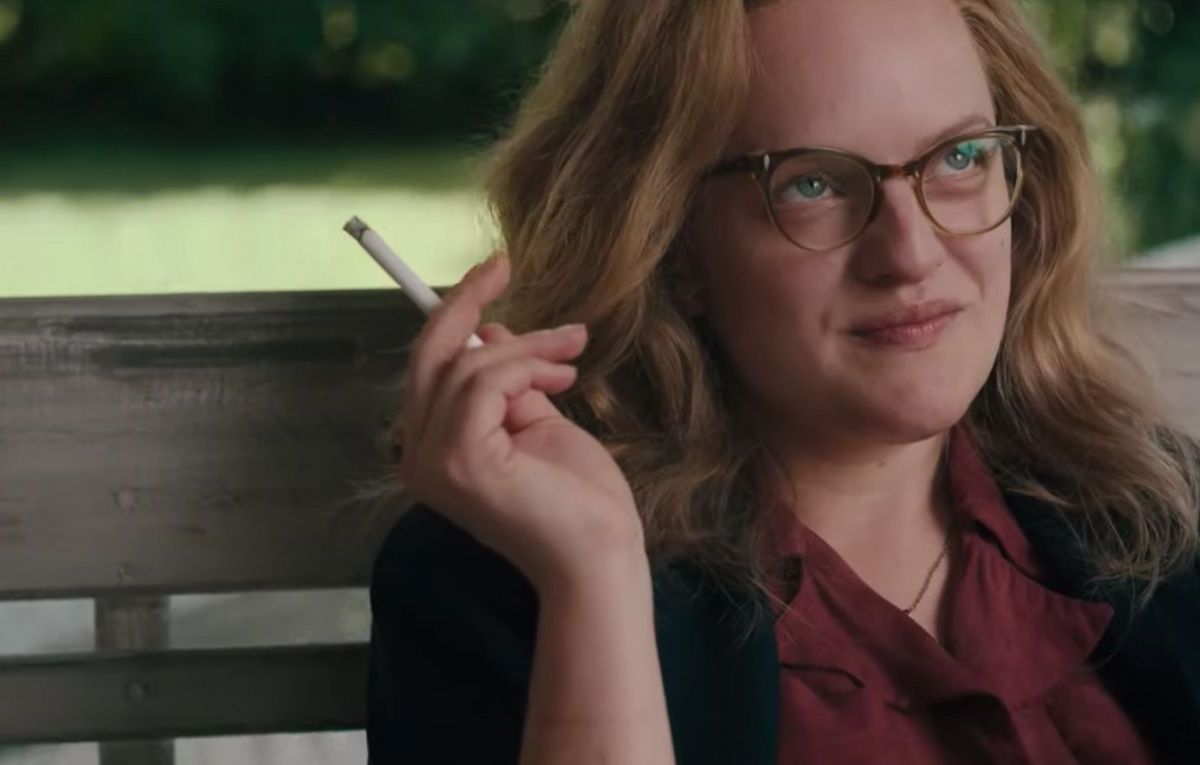 Directed by Josephine Decker and written by Sarah Gubbins, based on the book by Susan Scarf Merrell, a famous horror writer finds inspiration for her next book after she and her husband take in a young couple. Starring: Elisabeth Moss, Odessa Young, Michael Stuhlbarg, Logan Lerman and Victoria Pedretti.

What stokes the fires of the mind of a horror writer is probably something a lot of people have wondered, where such dark, disturbing ideas come from and while Shirley may be a work of fiction, its insight is nonetheless fascinating. It’s an age-old adage that writers take from their own lives but Shirley (Moss) finds more inspiration in taking from others. As Rose (Young) and Fred (Lerman) arrive in the home of Shirley and Stanley (Stuhlbarg), they can tell it’s a bit of an unusual place and that the lady of the house isn’t exactly planning on being their host but they’ve got no idea of what they’re really getting themselves into.

The darkness that Shirley emits not only from her work but from her persona is captured extremely well in the style of direction, it easily builds such a haunting, mysterious air. Decker’s direction feeds so perfectly into the themes of the story, especially in how it intensifies as events become darker and the lines of reality become blurred. It’s brilliant to see how it really embraces its subject matter, Decker’s style at times even feels like she’s making a horror film which just adds to its authenticity, as well as perfectly framing Moss as she plays out Shirley’s mix of calculated madness and depression.

Of course it always helps when your lead is one of the greatest actors of her generation, Elisabeth Moss is one of the most engrossing, beguiling and wildly charismatic screen presences you’ll find out there today and she brings every ounce of that to Shirley. Here’s this character who’s manipulative, self-centred, harsh and strange, she’s antagonises everyone she encounters and yet you can’t help but want to watch her, she’s whip-smart, sensational and fascinating, Moss brings out that dual side to her and deeply hidden is a compassionate side. She’s a revelation of an actress and what she does with Shirley is the same intense, amazing qualities that she brings to every role and she’ll forever be entrancing to watch but this role is a particularly dark delight. Your immediate thought might probably be that all of this means she entirely steals the limelight but in actuality Odessa Young more than holds her own alongside Moss. Young provides the perfect perspective to introduce Shirley’s unusual existence, she gives the audience a sympathetic guide into her world. Her performance only grows in strength as she starts to lose her grip on reality, Rose’s complicated friendship with Shirley, which is hesitant then blossoms, then stumbles is a huge contributing factor to the success of this film, it’s utterly compelling to watch. Not to mention that there’s a fantastic sexual tension created between the two of that permeates the house.

That’s not to say that the men of the house don’t do a great job similarly, Michael Stuhlbarg is similarly consistent in his portrayals, his supporting characters regularly become iconic and his version of Stanley is certainly memorable. The very specific mix of resentment and love that he shares with Shirley and the chemistry that Moss and Stuhlbarg share is perfectly warped, their strongest moments coming out of bonding over well-placed insults. Lerman’s Fred becomes the outsider, he can’t quite find his place in this house of madness but his need for admiration and praise adds a lot to his performance. He also has a much more traditional but strong chemistry with Young.

The progression to this story is one that some may struggle with, it doesn’t follow a straight path, it winds, it blurs and it shocks but if you can sit back and let it drive then it’s a hell of a ride. The relationship between Shirley and Stanley is something special, it’s not one that you’d envy but their mutual understanding and taste for manipulation and sharp-tongued insults lends so well to the tension and edge that the story builds. Creating that hostile atmosphere sets up the rest of the story perfectly, especially with Rose, being so unsure of how to act around Shirley, she simply gives in to her whims and the messy, gloomy, complex and slightly twisted progression of their relationship that results is so well written and a sinister pleasure to watch. It’s full of psychological games and the way that it plays with the classic 50s dynamics plays so well into that, male envy and competition, female jealousy and the constant fear of infidelity.

Shirley brings another intense and iconic performance from Elisabeth Moss, she brings a method to her madness and will make you unable to take your eyes off her but the surprise comes from Odessa Young who provides a fantastic sparring partner. There’s no one way to describe this film, it’s a melting pot of themes, tones and atmosphere, it’s part psychological drama, part horror, part thriller but Decker’s style perfectly blends all of it together. It’s a complex tale that’s so enthralling that it’s actually disappointing that it’s not based on a true story, and it’s one that will seduce you into its world of madness, malt liquor and misery.