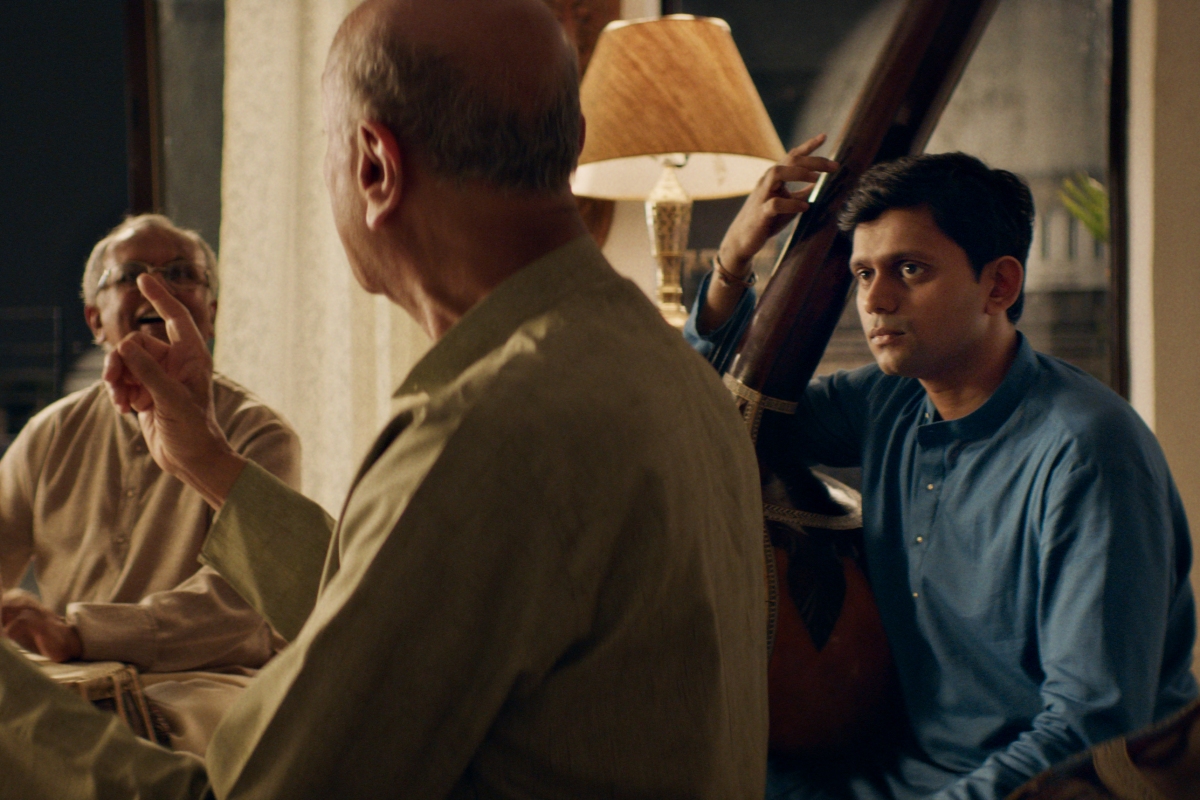 Written and directed by Chaitanya Tamhane, following the student Sharad Nerulkar (Aditya Modak) of an elderly sage (Arun David) who teaches a form of Indian classical singing. The old man pushes his apprentice to improve his voice and informs him that to achieve greatness he must forgo ego and a material life. This worldview troubles the student and it conflicts with the mindset of a city where, for many, the desire for fame and success is everything. Also starring: Sumitra Bhave, Deepika Bhide Bhagwa, Kiran Yadnyopavit, Abhishek Kale and Neela Khedkar.

If you weren’t familiar with Indian classical music before, you certainly will be after you finish watching this film, its story dives into themes of respecting your elders, history and tradition mixed with chasing your dreams and a need to live up to parental expectations. Having an actual classical music singer performing the lead role (Modak) only intensifies its commitment to telling a story about devotion and a passion for holding onto tradition and heritage. Sharad is your average guy, outside of this dedication to classical music, there isn’t anything much individual about him, he has created his whole identity around it and put so much time and effort into it, that he hasn’t really learnt to embrace other aspects of life.

It’s a double-edged sword to make Sharad such a simple, one-note kind of character, while it befits his motivations to become a classical singer and accept nothing less, it may leave audiences with little to grasp onto to root for or sympathise with him. He has the typical characteristics of someone focused entirely on one goal, he’s easily frustrated, a little bit sensitive and fairly self-centred, the only moments in which he appears to care about anyone else, is with his sage, Guruji (Dravid). Modak’s performance is great but there’s not a lot for him to do with Sharad for the most part being fairly reserved, though he gets to come out of his shell more during his musical performances and he strongly gets across that undying dedication to music.

Similarly to Sharad, the film’s style is quite simple, the direction follows that tone of a quiet drama, slowly taking in the events and committed to following his character as he goes about his life. The writing moves at a slow pace, there is some back and forth with the timeline but with such a steady, pensive pace it feels unnecessary when it isn’t adding anything to not follow a linear path. It does touch upon a number of different topics but they are brought though so quietly and gradually, they lack a potency. There are a great deal of moments that are thoughtful and really delve into his life but its philosophical leanings will work more for some than others. At times they feel like a crutch and are causing the film to add in repeated transitional moments between scenes that take away from the story progression, rather than add to it. It’s a pattern that becomes more obvious as time goes on, the style turns to something indulgent and needed a heavier hand in the editing suite to trim things down to a more satisfying and purposeful pace. In the end, the story simply doesn’t have enough to offer to justify it’s runtime, there’s a great concept but it’s hidden behind a lot of excess scenes and it frequently carries on well after it’s made its point.

The Disciple holds an interesting exploration of familial expectation, tradition and dedication but unfortunately it can’t quite get to the crux of it. Ultimately it’s rather indulgent filmmaking that could have made a stronger impact with cutting out the unnecessary content, it’s a struggle that’s only intensified by setting a film around a character that lacks charisma or a zest for life. There are some great qualities at work with this film, particularly the cinematography but as a whole they don’t work together succinctly enough to tell this story in a more emotional and powerful way.