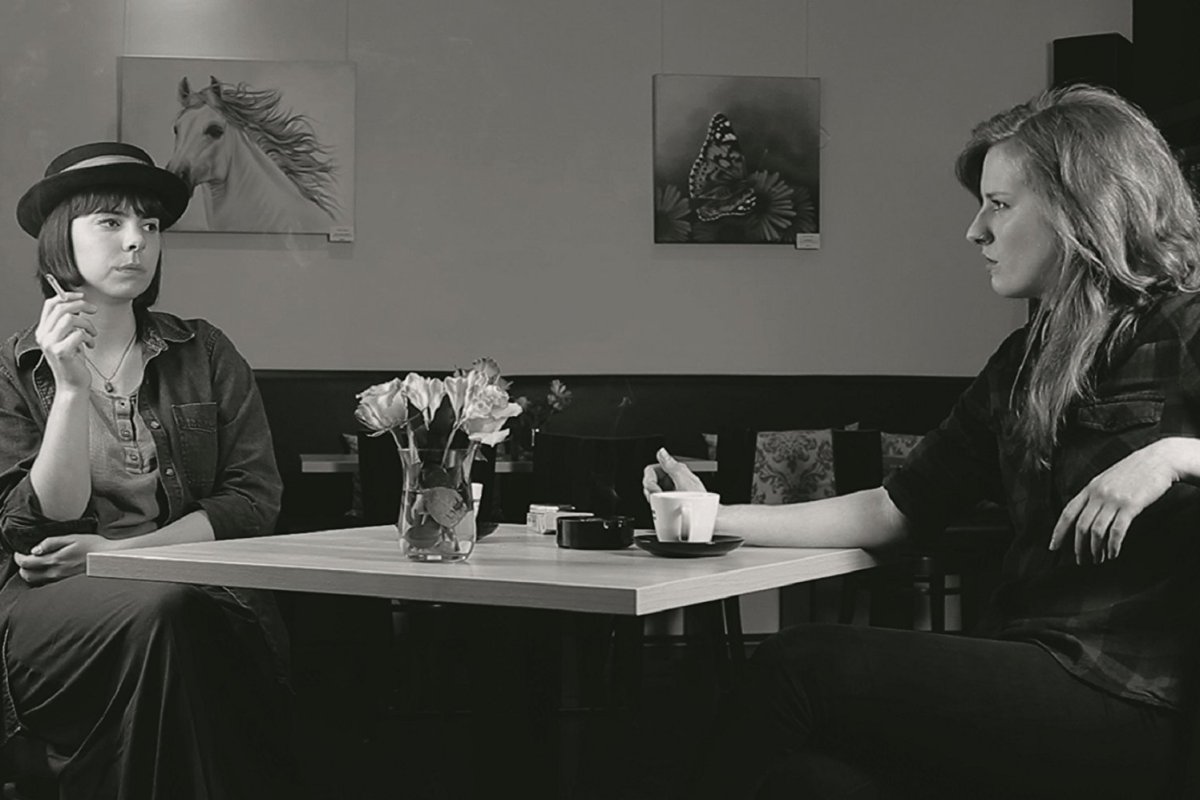 Officially titled Aufdruck but for us Brits, Label, written and directed by Jaschar Marktanner. Two young women in their twenties sit in a café and sip coffee out of way too small cups, while smoking an unhealthy amount of cigarettes and talking about everything under the sun and beyond, like aliens…Starring Mary Krasnoperova, Kira Mathis, Steffi Charlotte Flur and writer, director Marktanner himself.

Coming in at four minutes long, a certainly short, short film but even shorter has been done, in fairness, it is a format encompassing a great deal. Keeping things sweet does limit yourself to getting to the point rather quickly, so immediately the question is, will it be achieved in this case? The answer is quite a resounding yes. Immediately pointing to humanities’ fickle and judgemental nature and pushing almost to exaggeration, yet we all have probably met someone along these lines; regardless of age, gender or location. Choosing for them to be women feels disappointingly clichéd, representing a classic, feeble and petty circle of gossip, much to often used in cinema and television over the years.

The fact that there’s little opinion to make of leads Krasnoperova and Mathis, actually speaks quite highly of their performances; rather than the characters coming across as insufferable or deathly irritating, as these fictional chatters most likely would be if encountered for any length of time. The issues however, rise from the script, it’s sporadically funny but for what appears to be the aim of the film, much more sparingly used than expected. The choice of black and white (one that a lot of newer filmmakers choose for their short films) has nothing to add, other than potentially a sly jab at the classic genre of noir, which is completely unnecessary.

Sadly that lends to an overall view of the film, it has its moments but it doesn’t have anything new to contribute and the ways in which it does attempt to differentiate itself are somewhat tired. This feels like another case of a filmmaker with potential but there is much more of a personal directorial style to be discovered; though it will be interesting to see what Marktanner will make down the line.