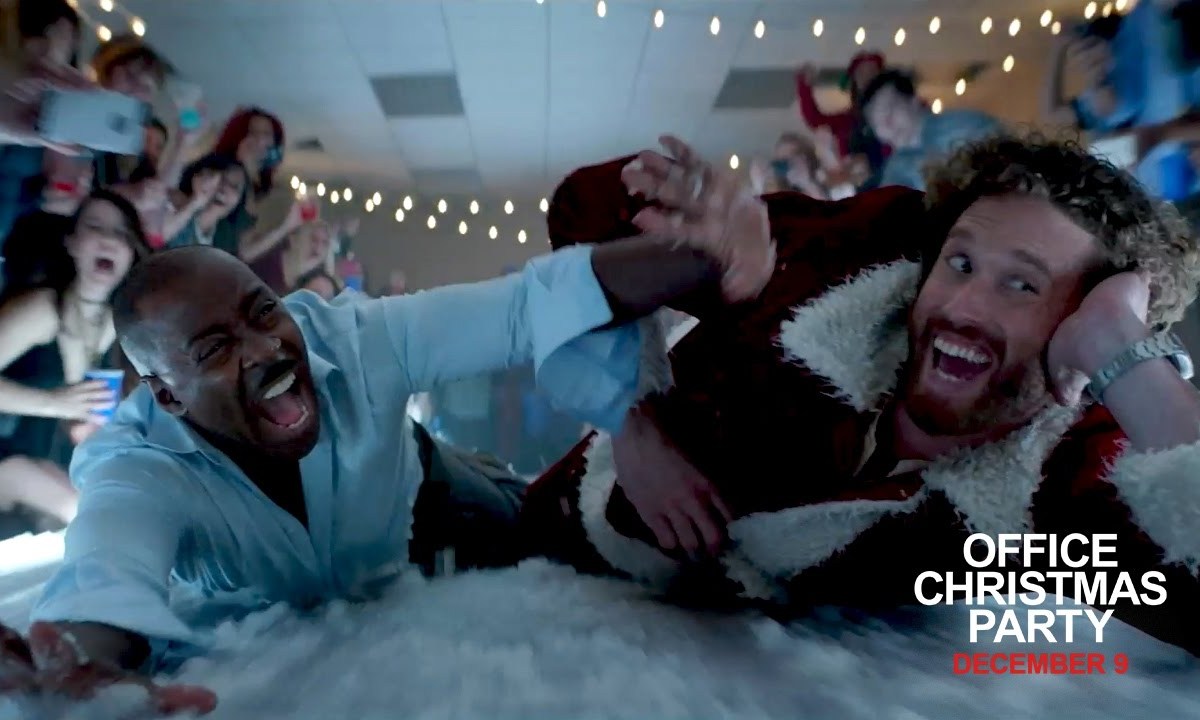 2016 has been universally dubbed a rough year and yet the quality of comedy, a genre that’s badly needed has been dismal, Office Christmas Party was poised to turn that around with a stellar cast and adding a beloved holiday. When a branch manager decides to throw an epic Christmas party to woo a potential client and save the office, against the wishes of his uptight CEO sister, the best of intentions are thrown out the window when the party gets out of hand. Starring: Jason Bateman, Olivia Munn, T.J. Miller, Jennifer Anniston, Kate McKinnon, Vanessa Bayer, Courtney B. Vance, Jillian Bell, Rob Corddry, Randall Park, Sam Richardson, Jamie Chung and Abbey Lee. Brought to you by the directors of Blades of Glory.

What advertises itself as a raucous party of carnage and mayhem, is actually quite a normal film with some fairly bad behaviour, those hoping to see outrageous events may be slightly disappointed by the surprisingly tame nature of the film but don’t dismiss it just yet. The cast is overflowing with comedic talent, stealing some members of the SNL crew, with Miller hot off his role in Deadpool, the ever dependable sap Bateman, still got some tricks up her sleeve Aniston, slightly crazy Munn, Idiotsitter’s Jillian Bell and Fresh Off the Boat’s Randall Park, it’s impossible to deny the talent of this film and they add laugh after laugh, it may not be what you’re expecting but don’t underestimate the humour it has to give.

There are struggles, mostly in the form of the Munn and Bateman’s relationship which is not particularly convincing, the attempt to portray a sense of Christmas morals of kindness and generosity which fall flat and trying to build detail of a tech company while feeling entirely forced and fake but these are actually fairly minimal hiccups. It is a fairly overused concept of a simple party getting out of hand and becoming something to remember for not quite the right reasons but nevertheless the addition of a Christmas element, following in the footsteps of The Night Before, creates a modern festive film for adults but it manages to go one step better and create a comedy that’s consistent. There are plenty of memorable moments and pleasant surprises, it doesn’t quite need all that ridiculous over the top insanity, it manages to do more with less.

It won’t blow anyone’s socks off and it certainly is less scandalous behaviour than you’d expect to see from the likes of T.J. Miller, although he probably could have killed himself doing much more in a Santa suit in the Atlanta heat. Despite that, all year there’s been a big gap in the market for films that are not just funny in moments but throughout the entire film and this one finally manages to create laughs for all of its hour and forty five minutes. It’s a cast of hilarious individuals coming together to make a film that may not be what you expected but it’s still a decent comedy, which is not something that you see frequently at the cinema these days.