With the biggest release of August, Suicide Squad, falling flat it’s up to September to pick up the slack and give us films to really get excited about and this line up definitely looks promising, don’t forget to click on the titles of this month’s picks to head over to their IMDB pages for more information!

Woody Allen’s newest film set in the 1930’s, following Jesse Eisenberg’s Bobby who moves to Hollywood from The Bronx and falls for his Uncle’s, already taken, secretary Vonnie (Kristen Stewart) only to end up heartbroken back in The Bronx and falling for socialite Veronica (Blake Lively). With a stellar cast and a good buzz coming from Cannes and early reviews this could be a return to the success of Blue Jasmine. Also starring Steve Carell, Corey Stoll, Parker Posey, Anna Camp and Paul Schneider.

The basic idea of the film and the fact that it came from the minds of Seth Rogen, Evan Goldbery and Jonah Hill, didn’t immediately give the greatest impression, then the trailers appeared and the concept of food being alive and the horror of discovering their ultimate destination (namely mouths) started to look funny. Then looking at all the voices involved, including: Kristen Wiig, Michael Cera, Salma Hayek, Edward Norton, Paul Rudd, Nick Kroll, Bill Hader, Craig Robinson, David Krumholtz and more, it got even more interesting. The buzz around the film has been incredibly positive and could this be the beginning of more animated films with adult humour? 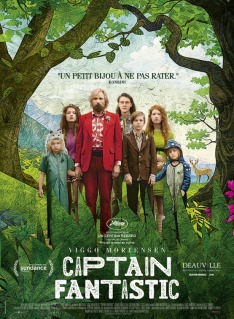 You may know Matt Ross from American Horror Story, Silicon Valley or even American Psycho but this time he’s stepping behind the camera, four years after his feature directorial debut 28 Hotel Rooms. Ben (Viggo Mortensen) is very much a parent with an old-fashioned view on how to raise his kids, out in the woods with a vigorous physical and intellectual education but all that may change when the family must leave the woods and enter the world to attend their mother’s funeral. This is another example of a film with some great buzz around it right now, having won over crowds at Sundance and Cannes but don’t be confused thinking it’s going to feature a superhero, this is very much a film about family and taking things back to basics. Also starring: Kathryn Hahn, Frank Langella, Missy Pyle, Steve Zahn, George MacKay and Erin Moriarty.

Having opened last weekend in the US and wowed at the box office, making over $26 million in its first weekend which, for a film of this size, genre and with a budget of less than $10 million, is incredible. Starring Stephen Lang, Dylan Minnette (Goosebumps, Prisoners), Jane Levy (Evil Dead, Surburgatory), Daniel Zovatto (It Follows) and newcomer Emma Bercovici, a group of friends decide to break into the house of a wealthy blind man, only to find themselves trapped, fighting for their lives against a man they underestimated. With blockbusters, so far this year, being a slight let down it’s films like these, the smaller more mysterious features that are winning over audiences and this may well be one of them.

Originally slated to be released last month (generally this phrase is used at least once every month with UK releases) but will be hitting cinemas next month, another film that has appeared out of the blue with rave reviews, currently holding 99% on Rotten Tomatoes and 8.3/10 on IMDB. A divorced father (Chris Pine) trying to make a life for his son, with the help of his ex-con brother (Ben Foster) plan a series of heists to save the family ranch but standing in their way is a Texas Ranger who’s about to retire (Jeff Bridges), who will come out on top? Also starring: Dale Dickey, Gil Birmingham, Katy Mixon, Kevin Rankin and Marin Ireland.

Taika Waititi may be a name you’ve become more familiar with recently, being currently at the helm of Thor: Ragnarok but some of you may know him for his work on What We Do in the Shadows or Eagle vs Shark, before the release of his first major blockbuster comes a film about a rebellious kid (Julian Dennison) and his foster uncle (Sam Neill) who go missing in the wild New Zealand bush. Similarly again this is one with extremely positive chatter, a 100% Rotten Tomatoes score, 8.4/10 on IMDB and 3.5/4 from Roger Ebert.

The first of two dramatically different films starring Daniel Radcliffe this month, most likely you will have already seen pictures or trailers from this one, where Radcliffe goes undercover for the F.B.I as a neo-nazi. Brought to you by the generally unknown Daniel Ragussis, it’s difficult to know what to expect but with a cast that includes Toni Collette and what should be an out of the box performance for Radcliffe, this one is worth a watch just to satisfy curiosity alone.

There has not been a huge amount of chatter for this one but that which has been said is all good, the zombie genre has fallen to the wayside in film, generally becoming predictable and unexciting but this may be the film to bring it back. Directed by Colm McCarthy (Peaky Blinders) and based on the 2014 novel of the same name, a scientist (Glenn Close) and a teacher (Gemma Arterton) with the help of soldiers including Parks (Paddy Considine) must ensure the survival of young Melanie (Sennia Nanua), who may be the key to the disease that has infected most of the population, turning them into “hungries”. Making this a zombie film that potentially has more to offer than simply gore and blood.

This film is certainly not a dead cert, it is a remake of a remake, bringing back a genre which is slowly creeping onto our screens again after having experienced its golden age over 50 years ago, westerns. The intriguing part to the film is the cast, Denzel Washington, Chris Pratt, Ethan Hawke, Byung-hun Lee, Manuel Garcia-Rulfo, Haley Bennett, Peter Sarsgaard, Martin Sensmeier, Luke Grimes, Matt Bomer, Cam Gigandet and (unfortunately) Vincent D’Onofrio. Holding on to the premise of the original, seven men are hired to protect a poor village against savage thieves. Directed by Antoine Fuqua (Southpaw, The Equalizer, Olympus Has Fallen, Training Day), it’s extremely difficult to say which way this one will go, it could be highly entertaining or it could be a disappointment but it feels worth finding out.

Now this is most likely to be one of, if not the, weirdest films that you will see all year. When Hank (Paul Dano) is stranded on a deserted island he befriends a corpse (Daniel Radcliffe) and begins a ridiculous adventure to get home. This one is difficult to describe, you need to see the trailer, and of course it’s likely to be one of those films that won’t be for everyone but for those of you who get excited by the concept of something so delightfully weird and crazy, this should be one to remember!