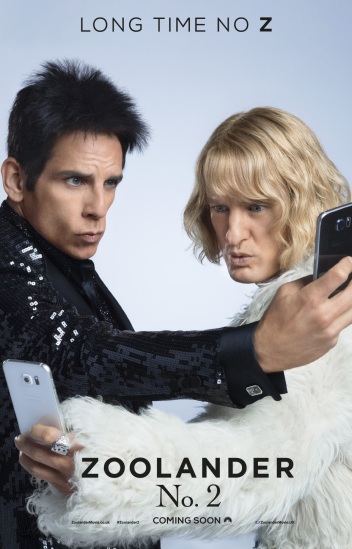 These days when a sequel arrives in quick succession to the previous, there’s an overwhelming reaction of: is that really necessary? Why? Or just a simple no thank you, but when a sequel is 15 years in the making it becomes gigantic the second the announcement is made. The question is: does the wait really make it any less of a money making gimic?

The first sign in agreement with the gimic is the sheer amount of famous faces being shoved into this film, though I must concede there’s probably a huge number of people out there that wouldn’t mind seeing Justin Bieber assassinated on the big screen. On the other hand there’s the huge inclusion of Benedict Cumberbatch as All the gender non-specific model of the moment, would Cumberbatch really join the project without a decent script given the fact he’s been on a hot streak ever since he first graced our screens as Sherlock Holmes? Or is he just a big fan of the original? There’s no way to tell.

The entire concept of the Zoolander world is complete farce, but that’s what made the original a classic comedy to many, it’s pure ridiculousness and self-awareness of that fact. Zoolander pushes the boundaries of idiocy, but can it keep pushing without going too far and stepping outside of what is actually funny? The bigger question is, can it stand up to the original and create the sequel that so many have craved? It’s anyone’s guess. It’s a huge task, and with the original favourites all back: Stiller, Owen, and Ferrell, and new additions Cumberbatch, Cruz, Wiig and Munn (even Lewis Hamilton has gotten in on this one) there’s hope for a decent and worthy sequel.

Check out the trailer here:
https://m.youtube.com/?#/watch?v=Z0CrEda-BB4