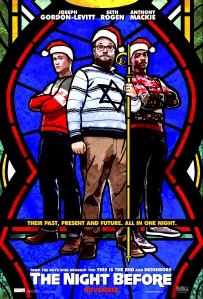 We all know by now what happens in 90% of films that star Seth Rogen, you get a comedy of foul language, drugs, sex, idiotic behaviour and as many inappropriate references and actions as one can fit into an hour and forty minutes. Of course the current critically acclaimed film Steve Jobs with Rogen playing Wozniak is one serious exception but there’s always an exception to the rule. Written and directed by Johnathan Levine (50/50, Warm Bodies), the story of three life-long friends (Rogen, Joseph Gordon-Levitt and Anothony Mackie) attempting to have one last Christmas Eve to top them all, before they get too famous/married to do so. Searching for the party to beat them all while sampling a smorgasbord of various drugs lovingly provided by Seth Rogen’s on-screen wife Betsy (Jillian Bell), it was never going to end well.

Though the knee-jerk reaction would be to dismiss as the typical excuse to get a few cheap laughs and act like jack-asses, with the inclusion of Mackie and Gordon-Levitt there is already hope that this could be an actual attempt to make a modern decent Christmas comedy, not an easy task. Of course there are plenty of funny Christmas films but how many of them can you really class strictly as a comedy? So many of them just fall straight into the family category, because they’re usually aimed primarily at children so a comedy aimed at ages 15 and above is something attempted and achieved at a much lower rate. The only few that come to mind without a lot of thought are ‘National Lampoon Christmas Vacation’, ‘Trading Places’, ‘Scrooged’ and if you’re English and replace Thanksgiving with Christmas like I do, ‘Planes, Trains and Automobiles’, all of which were released prior to 1990. But here comes The Night Before to end the trend of Christmas films being for kids, and (hopefully) really give us something to enjoy this December.

Check out the trailer here: