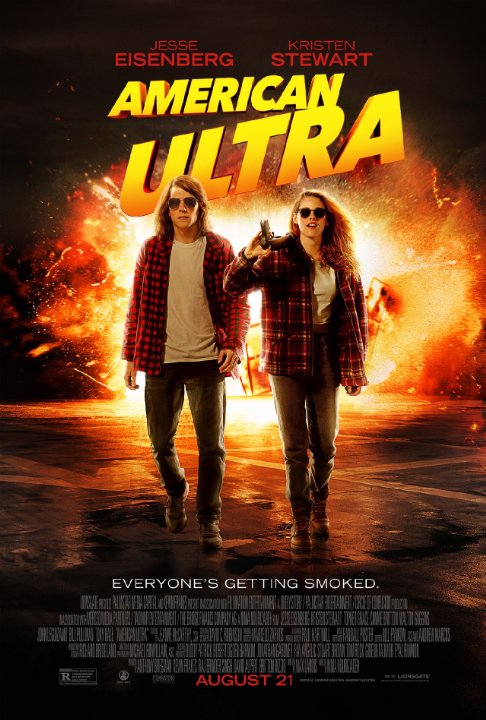 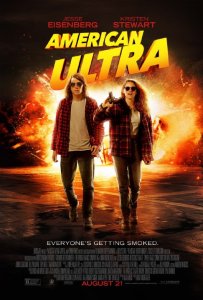 American Ultra: 04/09
Again this is one that’s already out and many people may have already seen but for those that have not, you should. A stoner-comedy-action-spy film of a simple young guy (Jesse Eisenberg) who turns out to be a government weapon and just wants to be left alone to be with his girlfriend (Kristen Stewart)…and to stop killing people. 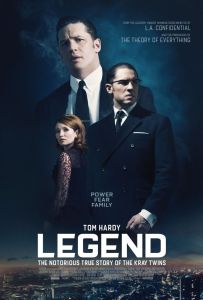 Legend: 04/09
By now I would think that pretty much any cinema going person would have heard of and possibly already seen this film, myself included, and will be reviewed in the very near future. I can definitely recommend it. The story of the Kray twins in 1960’s London at the height of their power, but is it worth it? Two gangsters that seem to love nothing but being just that, one driven by business and one driven by what can really only be called madness, Reggie and Ron. It is not for anyone who does not like their films filled with violence, of course it’s not just 130 minutes of fight scenes there’s plenty of non-violent drama happening in between. There are also plenty of arguments that this film just glamorizes violence and being a gangster and all the negative themes but looking at the film as a whole it does not make you feel bad for the Krays, or think that they were actually just nice guys in a bad business, no they were violent criminals but that does not mean they do not have a great story to tell and it is told in this film, and Tom Hardy playing both twins is something not to be missed. 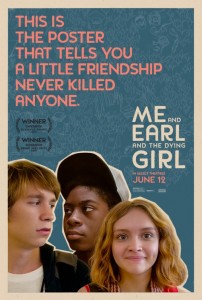 Me And Earl And The Dying Girl: 04/09
A small indie film with a lot of heart about a boy who is forced by his mother to befriend a girl who is diagnosed with cancer. This one could have just fallen through the cracks but with festivals giving it a definite thumbs up, and a cracking cast including Bate’s Motel actress Olivia Cooke and Parks and Recreation Alumni Nick Offerman this is one I’ve much looked forward to and should be worth the watch. 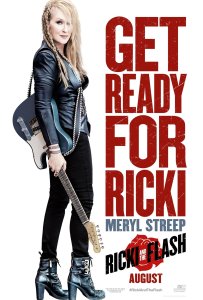 Ricki & The Flash: 04/09
I will readily admit that the idea of Meryl Streep playing an aged semi successful rock star/mom did not really get me chomping at the bit to see it, in fact rather the opposite. Since then my mind has been changed, given the interviews and trailers and clips this actually looks as though it could be better than expected; it just needs a better poster that doesn’t make it appear like a straight to DVD experience. With Streep and her daughter Mamie Gummer playing exactly that in the film it holds some intrigue and fingers crossed it is not as cringe worthy as it first appeared. 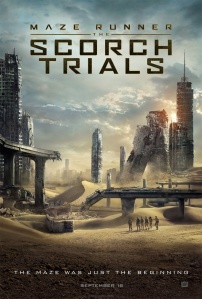 Maze Runner: The Scorch Trials: 10/09
Normally this would not have been included but as I’ve seen it and would recommend it, I had to include it. The first film was one of many these days of young adults stuck in dystopian futures with little hope of survival and the odds stacked against them at every turn, but it did manage to exceed expectations and start a worthy franchise. This next instalment was the decider, will it succeed or will the story die out? This time around our young heroes are transported to another facility only to find the need yet again to escape, but what they’re escaping to is the scorch, an unforgiving environment not built for people to survive. They did it once can they do it again? Well of course they can because there’s more than two books. 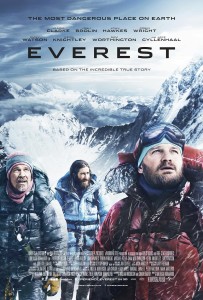 Everest: 18/09
Already on early release in some cinemas this one is one to watch purely for the unbelievable scenery if nothing else, the breath-taking but also life taking highest point on the planet. It is not the first nor will it most likely be the last of films showing the fight of men and women when something goes wrong during a climb, a tale of strength and will and relentless drive to survive. A stellar cast including: Jason Clarke, Josh Brolin, John Hawkes, Emily Watson, Sam Worthington, Keira Knightley, Robin Wright and Jake Gyllenhaal to name less than half. 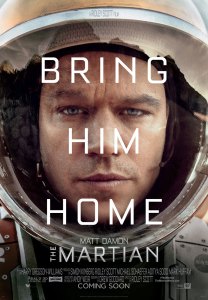 The Martian: 24/09
As I’ve already made a post about this one it is plain to see that I’m extremely looking forward to it, a great cast and a great story line with hopefully flawless images (given what we’ve seen with films like Gravity and Interstellar as of late). An astronaut left behind on Mars, an inhabitable planet with only enough resources to keep him alive for a few weeks, will he survive? Will there be a great cost if he does? These questions being answered makes a great concept and so long as it hits its potential this should be unmissable.